There are some other known recipients but this is Larry’s day in my book:)

Dr. Oz is also in here for an award as well as other research and development  individuals at the Howard Hughes Institute.  Dr. Oz gets enough publicity and most of the time is on key.  Larry Ellison is always in the press with nobody 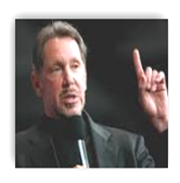 understanding him at times, but he’s brilliant and started out writing code.  For all his life he has had to live with being upstaged less than 24 hours of having the largest IPO by Microsoft so it was short ordeal.  Oracle does quite a bit in healthcare and has grown with several acquisitions.  When Windows 95 was out it connected to Oracle data bases via ODBC, so Oracle and Microsoft worked together going way back.  He’s also part of the Gates Foundation Giving Pledge, one of the first members.

When President Obama goes to the Silicon Valley, Larry’s in the group for dinner.

He’s always known for being a little different but the folks with brains and code know how are, but it makes them special people by all means.  One of my favorite Larry Ellison videos, “this is box”.  Congrats to Larry for all his contributions.  BD

Mehmet Oz, MD, and Michael Roizen, MD, are recipients of the Paul G. Rogers Award for their combined and individual efforts to deliver health information to the public, through their book, YOU: The Owner’s Manual, The Dr. Oz Show, and the Real Age program.  The award honors individuals who have provided significant services to improve the public’s health, and is in honor of Representative Paul Rogers, the former chair of the House of Representatives’ Subcommittee on Health and the Environment, and longtime advocate for medical advancement and accessible healthcare in the United States.

Larry Ellison, founder and CEO of Oracle, is the recipient of Distinguished Medical Informatics Award for his contributions to healthcare through information technology and the Ellison Foundation.  The Distinguished Medical Informatics Award is given to an individual who has made a significant contribution in technology, allowing healthcare professionals and individuals to use technology to communicate more effectively and efficiently. Mr. Ellison is the first recipient of the award.

Purrell Choppin, MD, is the recipient of the Medical Research Award for his extraordinary leadership of the Howard Hughes Medical Institute.  The award is given to a medical researcher who has made significant contributions  During his tenure, the annual budget grew from $76 million to more than $500 million, and significant contributions to AIDS, cancer, cystic fibrosis, diabetes, and heart disease research were made.

Ms. Ann Duesing is the recipient of the Michael E. DeBakey Library Services Outreach Award for her work to provide healthcare information to rural and underinsured communities.  Ms. Duesing is the Outreach Librarian at the University of Virginia’s Claude Moore Health Sciences Library, and was the first outreach librarian in southwest Virginia.

For more information about the National Library of Medicine,

For more information about the Friends of the National Library of Medicine,