Home » My Commentaries » Technology » “People Don’t Work That Way” A World of Broken Software Models That Don’t Align To the Human Side,Too Much Push At Times With Only A Proof of Concept That Fails in the Real World..

Writing software is hard and trying to get the user interface and interactivity that will entice and get users excited is nothing new except now the efforts are accelerated.  We have a lot of “me too” types of software that is very similar to what another company is doing but they may have a few more queries that results in more information, different information, different formats of information and so on.  We are going to just be a glut for software as all try to find the perfect match and there will be more tossed of course than used.  That doesn’t mean though that there’s not “some” value in what is produced though as I have seen in many times to where something that can’t stand on it’s own

becomes an integrated part of something else, maybe sooner or maybe later.

I found this out early so I’m not that smart, just been there done that before many of the current developers were out of grade school.  I say that just to show the the process has not changed much in that respect.  Also too with maturity you also learn that the consumer is not only thinking about your software, but also their bank software, their email software, their social network activities, the software they use for work and anything else that gets piled on too.  So when a developer has one focus on their software, which is the way it is as they want to make sales, they sometimes forget about the other stuff consumers have going too and we have to figure out what we really need and what we can really fit in and not be a slave to gobs and gobs of software products.  Sure using an app may only take a few minutes but there’s a of competition vying for that space in the consumer’s life today.

So we have this “see what sticks to the wall” process going on and not much sticks but some of course do.  When you look at the possible success of start ups, it’s not very good as far as who’s going to make it.  So again some fail due to bad models.  I can’t tell you how many times as a developer that you get fooled as you just don’t know.  You may of course use your own software and/or devices and it works great, friends try it and it works great but maybe the friends don’t tell you they got bored with it after a couple of months either, you just don’t know.

We’re getting kind of lost in a world of “software” glut if you will.  Some of it is very close to a “me too” with a small change in user interfaces or perhaps a few different queries and is that enough to entice people to start or change?  Maybe yes and maybe no.  I’m seeing an awful lot of “virtual” world out there that ease their way over into the “real” world and some of it is not really good as people can’t tell the difference on where priorities lie at times.  I call it “The Grays”…

Sadly we saw a phase of this at the VA Hospital in Phoenix to where meeting goals and numbers with attaining a bonus left Vets without care.  It’s scary and sometimes I think we need to take a step back and pause a little.  We have accelerators groups coming out our ears and yes some of that is good and needed too but what is the end result here with value with 99% going in the trash can and 1% maybe able to make a go of it?

Look at the SEC with this post below…there are experienced developers that know what’s behind the code and yes it is not all high frequency trading but that is a big issue as you have code running out there creating additional risk with rogue algorithms that run interference all the time and do play having with stock prices.  How could one get in front of Congress and say markets are safe?  This is insane as how could someone with no hands on experience in writing code say this, she doesn’t know.

So again is software going to eat up the world and be our own undoing here at some point in time?  Why do we spend so much time trying to make humans convert to what the software needs and wants?  We are having big discussions with medical records on this topic now too as a few years ago the importance of the doctor was over run by the insurers and better coding does not affect care directly but rather ensures better payments.  Sure both are important but we don’t have a balance there either.  I don’t get excited at all with every new piece of software that lands out there for sure and there’s still really good stuff evolving too.

I get sick and tired of the gamification stuff that insults my intelligence out there.  I tell all to see if you can 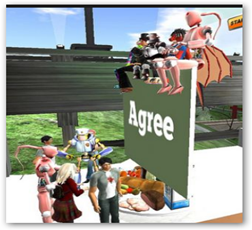 picture someone like Ben Bernanke using the app and that will give you a pretty good indication of any staying power with the software.  Here’s an example below..and you know “people just don’t’ work this way”.

So again maybe time to take a step back here and there and think about what you are doing and the people around you and talk like humans. I don’t know how much longer “The Grays” will have a hold on so many but I hope many wake up soon to what’s going on.  I have not had one person disagree with me on this with virtual and real world values as everyone can either see in someone else, themselves, etc.

It’s just getting “real old” with this battle of trying to convert humans to the software when in fact it should be the reverse and I’ll be the first one to say it too, it’s not easy.  I have spoken recently with a number of people that say “they are working hard to stay under the radar” and you know when the virtual world in some area crumbles, under the radar in the real world doesn’t sound bad at all.  It’s hard though as shareholders and corporations don’t want to seem to allow us to be humans as we are and we have this continued force at our back all the time.  Sure we’ll use mobile banking and things that we need to exist for sure.

Maybe developers might think about this a little more and give it some thought “do people work this way” as every new User Interface and new query system that comes along is not going to be a winner.  Here’s a link to a PBS documentary on the “Like Generation” mostly focusing on Facebook and see what you think?  Is this the virtual world taking over real world values here?

“Generation Like”, the Relentless Marketing of Teenagers Online and The Money It Makes, “Fake Like Farms” and The Money Generated There As Well..(Videos)

It’s been a big disappointment for sure when we hoped that jobs would have been created to repair and fix the US infrastructure and all we ended up with was a bunch of virtual values that you can’t eat, wear, walk on, drive over, etc. and what good has it really done?  Sure there’s always software development going on everywhere and I’m no complaining about that at all as we need software that builds efficiencies to help us, but instead all we seem to have ended up with is a lot of virtual crap algorithms that scrape and sell our data and the software that we need that gives us efficiencies and makes us smarter is having to sadly take the back to seat to all of this…very scary.  I almost think we have a virtual White House anymore as everything out of there is templated as well and looks like a system I see somewhere else on the internet.   When I saw the Obama / Biden selfie it made me wonder “are they over the edge into The Grays as well” and find myself again saying “people don’t work this way”, at least in the real world I know.  Even mature tech CEOs get it too if you look at the links below.  BD U.S. businesses are being destroyed faster than they’re being created