Optum Hospice used to be known as Evercare until the last year when United Healthcare subsidiary, Optum rebranded the company.  To me a hospice company owned by a health insurance company just doesn’t mix, especially when the same corporation has truckloads of subsidiary companies that are not always apparent to the consumer.  2/3 of United’s profits come from selling policies and the other 1/3 comes from writing code, selling software, consulting and so on, in other words Health IT.  Optum also wants to be contracted integrators as well for major medical record systems as they list on their website. 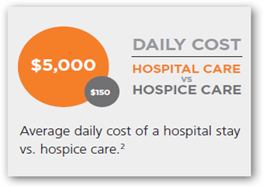 insurer in the face with the allegations of pay for performance measures as it is stated they created an incentive to staff to admit and retain ineligible patients by giving out bonuses and other incentives based up on meeting their targets.  It’s also beginning to sound like the same stat rats at the VA as well, who were so stuck on numbers they could not make a left turn to save a life.  The bonuses (or as sometimes called P4P) were for staff members who admitted, certified and recertified and discharging patients.

Employees were told there would be staff reductions or terminations if the census fell below targets, as well as people could be fired or demoted for discharging ineligible patients.  Here comes the algorithms as Optum is accused of creating discharge procedures that made it difficult or substantially delayed the discharge of ineligible patients.  Let me guess, it’s all software with input and the algos give you the decision perhaps.

The lawsuit also states that contracted physicians were also pressured to improperly certify and recertify ineligible patients.  Here’s all the chronic conditions that were targeted, dementia, Alzheimer's, and pulmonary irregularities and the goal was slated that they could in fact keep patients with such conditions for more than six months.   As a result of such actions, Optum is accused of submitting false claims to Medicare and was overbilled.  This gets kind of interesting as the new #2 person at CMS that Burwell appointed, Andy Slavitt  comes from United Healthcare and was the CEO of Ingenix at the time of the AMA lawsuit (Killer Algorithms chapter 19)  that used algorithmic automated processes to under pay doctors for 15 years.  Ingenix algorithms just raised their ugly face again  within the last week with a Blue Cross Company still using them after most everyone else settled in New Jersey.

Optum Hospice is on the move too and growing with opening new facilities.

It goes on further here with employees being given a “scorecard” for each Evercare Office and the offices that were meeting goal would receive positive points if the average daily census met goals.  This sounds like the ad business here with those offices who converted 85% or better of their referral getting a bonus.  Also the case says that offices were penalized if the discharges of ineligible patients exceeded 10% of the average daily census.  Bonuses could be as high as 20% of their annual salary.  This goes on to talk about a sales force hired called Community

Outreach who’s duty was to troll nursing homes, hospitals and other care facilities to obtain new clients.  Now sales portions take place everywhere and nothing wrong with sales people, and they received commissions on the news of new admissions.  I can’t see a problem there but as long as the sales calls were good will calls and not looking for ineligible patients.

I have seen one thing on their website is that Optum, formerly Evercare is always advertising for people to come volunteer and work for them.  Both the contracted doctors and employees told Evercare they had ineligible patients that needed to be discharged and decisions from higher up mad the decisions.

I know when I had to chose a hospice service for my mother last year, Evercare was not on my list as I just pictured being loaded down with quantitated numbers about my mother while I was trying to see to her care in her last few days.  I report enough on United and their subsidiaries to see all their stats and how they live by them with lacking ethics sometimes and I knew better.

It goes on here further to say that salaried physicians who worked there were also coerced and the nature of the contracts provided incentives to the physicians to keep the patients in.  In another area of United Healthcare relative to Medicare Advantage, doctors are being scored and fired across the country and are given no reason or in some cases no communication beyond a letter saying your services are no longer needed.

The case further goes on to state that the sales force also knew that targeting the certain types of chronic patients allowed for them to be certified “terminally ill” once they were in house, which allowed them to keep them longer and bill more.  Again we go back to Phoenix, the site of the VA issues where the billing office is for Optum (Evercare).  There are several examples in the court case you can read here.  After I read through it I can see why the Feds stepped in as they are owed money according to the case filing.  United bought Evercare in 2001 so all this took place while under their ownership of the company.

The suit also states that another division of Optum, Ovations, a health and wellness company for people 50 years an over in age, worked hand in hand with Optum Hospice.  United owns a few wellness subsidiaries.  Americhoice was also mentioned which has since been absorbed into Untied Healthcare and no longer maintains the separate identity and is called the UnitedHeatlhcare Community Plan.

So again all we hear from United Healthcare day in and day out is pay for performance so will it come back to bite in their hospice operations?  There’s some pharmacists too out there with Walgreens that get to collect pay for performance from United/Optum in some parts of the country. Are the P4P models beginning to fail?  Could be.   BD

We know how United/Optum knows how to model and code with the contracts they have received for fixing not only the US exchange but also some state exchanges as well, so again watch these folks with their algorithms as they know how to hide and do it better than anyone else out there, and it’s all proprietary and it usually takes audit functions years to catch up with them.  Watch video #2 in the footer here to see how quants work and insurers are hiring them by the groves for their profit making math models.  BD

Health Insurer Actuary Jobs Becoming More Difficult In the Era of Killer Algorithms, Can’t Function Like They Used To As Information Changes Take Place Daily And Hourly, More Insurance Companies Are Seeking quants to Create New Math Models, The Next Level Up From Actuary Calculations

Evercare is now known as Optum Palliative and Hospice Care, which provides hospice services across the United States.

One of the suits names Evercare’s parent companies, including UnitedHealth Group.

The complaints include allegations that management pressured employees and physicians to admit and retain patients who were not terminally ill and challenged or disregarded physicians’ decisions that patients should be discharged.

According to the lawsuit, the companies “targeted for admission ineligible elderly patients with conditions like debility, dementia, Alzheimer’s and cardiac or pulmonary irregularities that while serious were not likely to lead to the death of the patient within six months, thus allowing the defendants to keep these types of patients on their hospice census for more than six months, if not several years.”