Home » Medically Related » My Commentaries » Personal Health Records » Technology » Apple In Talks With Insurers Now Relative to Healthkit? If So We’re Going The Other Way As Consumers Are Waking Up to the US Data Selling Epidemic Along With Profit Making Algorithms That Generate “Secret Consumer Scores” That Benefit Corporations - A Big Factor With Inequality Acceleration

As this article states though there’s no concrete evidence or documentation thus far of any meetings but I think I can safely say one thing here and that’s the fact that even Apple is not sure which direction they are going with all of this.  It’s kind o 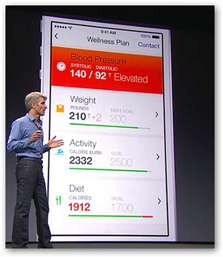 f reminding me of the early days of Oracle when they sold software they didn’t have yet, and that’s done more often than what you think.  If software companies can get your excited on a “proof of concept” and develop an army of fans, well there’s the inspiration to actually write the code.  That’s the way it works out there sometimes, of course all about money so as not to waste time with something people won’t want.

When I read about the platform on what is there so far, there’s still a lot more to come obviously so to comment fully when it’s not even built yet is kind of hard for anyone.  We do know there’s a set of APIs to work with and that’s becoming more common place today and is making it’s way into healthcare.  As a matter of fact the folks at Zoeticx got a call and met with Apple a few weeks ago about integration with medical records.  Apple was gathering information about integration into electronic medical records during the meeting as I am sure they are doing with everyone with getting into the healthcare apps.

I heard it was an interesting meeting and of course Apple has to determine how far the apps will go and what they can actually do as they would want to stay outside the of having to submit to the FDA as that would be a delay, a potential long one, so getting less complex consumer apps would be move one.  Allscripts met with Apple the next day.

We already are aware that insurers are already buying up our credit card transaction data and that they record our voices at their call centers so um…yeah….let’s toss some more out there for some additional “secret scoring” to take place…not!  If by chance you have missed this, the World Privacy Forum did a great report on this topic and they too are concerned about all the data selling and “scoring” of consumers that goes on behind closed doors.  If Apple is talking to United, heck they can do code together with the huge number of technology subsidiaries United has, here’s a bunch and look at the SEC filings too.

So Apple, knock yourselves out with insurers as if that’s your direction with insurance companies, well most of us are not going there.  I have pretty much figured out too that the Mayo app already written for the platform sends your patient data over to Optum

Labs as all the medical records go over there for analyzing and the ability to sell some analytics and make some money, while all the time competing with the FDA Sentinel program that does the same thing, except not for profit.  I got on to that as people were talking that once they use the Mayo Apple app, they couldn’t get their data out, it’s only a one way with you putting data in.  Here’s how the Optum Labs portion of this works with Boston Scientific being their first paying client to rummage through all the medical records to find data about their products.   McLaren and Dignity healthcare systems also kick in de-identified medical records to the Labs project.

Again the data selling epidemic is so bad it’s hurting consumers and the economy as folks don’t know when to stop and determine when they do have enough information for intelligent decisions.  I said 3 years ago that data addiction was going to be the next upcoming 12 step program soon.  Truth of the matter is though unless we get license the data sellers and distributors, we are not going there with having to try and second guess some legal lengthy “privacy statement” either.  Not on the web, but in the “real world” folks are already starting to head for the exits to stay out of the radar and insurer radar is a big one that folks are making efforts to run from as we know what they do with their data and how we get “secretly scored” by them.  No trust there for a lot of it.

Apple is no different than the rest of the folks out there in software world today as they too can’t quite figure out how people work, and you can see it clearly it with way too many broken software models.  I had a little Twitter chat with the CIO of the FCC, David Bray, and he agreed with me with needing more open source “scoring” algorithms as we don’t know if proprietary code is fair or not.

hopefully nobody wants to toss more broken algorithms out there that few of us will want to use.  Due to money and how easy it is to sell data, there are some bad models being shoved down our throats too and I see it.  I’m not that smart but years ago when I wrote code do you think every model I created was a winner?  Of course not so with experience in that area I do my “sniffing” and it’s been pretty much on target for a number of years now.  I said 2 years ago to cut out some apps as it’s getting old.  As long as VCs keep financing that complex data selling business model so they can project a fast ROI, we’ll keep having more and more apps showing up along with their legal “privacy “ policies that few understand and are subject to change as a web page is updated.  BD

In addition to seeking partnerships with several different hospitals and health institutions for its HealthKit initiative, Apple is also speaking with major U.S. insurance companies like UnitedHealth and Humana.

In a report on rising medical costs and partnerships between insurance providers, corporate employers, and fitness device makers, Bloomberg suggests that Apple has spoken with insurance companies about HealthKit, but no specifics on the conversation were provided.

The focus of the piece, highlighting the insurance perks that companies can offer to employees with healthy habits, implies that Apple may be exploring partnerships that would possibly allow its collected data to be shared with insurance companies and other medical providers.