Home » My Commentaries » Other Items of Interest » Technology » Eric Holder Resigns As Head of the Department of Justice–Next Person Heading that Agency Needs to be a Hybrid, Part Technology and Part Lawyer, Hard To Find, But Talent Is There If You Look..

60 Minutes just did a story about identity theft and it was also covered in the story that Eric Holder was also a victim of identity theft and how someone used his social security number and date of birth to file a fake return.  Maybe this was the final straw?  I don’t really know 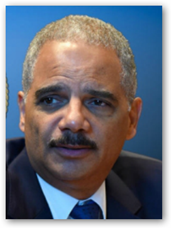 but it goes to show that nobody is exempt and makes the case that just any old lawyer or judge is not the right person to run an agency like this or half the agencies we have out there today.  They have no “data logic mechanics” and thus so their perceptions will always be off target in the way they see the impact and how things in the data world “really” work.

We are all frustrated over the banks not getting held accountable and this is exactly why it never happened as without the second side of being a “hybrid” as a leader being present.  I watched the documentary, “The Untouchables” and 5 minutes of DOJ Lanny was all I needed to hear as the body language, his speech reeked of no confidence in how to pursue, investigate or make a case with intelligence in technology that was much smarter than him.  It stuck out like a sore thumb.  If you want to back track and watch it after I had said such, here’s the link.  I’m the smartest person in technology by far but if can see it plain as day, so can others.

It’s the code, proprietary, running on servers 24/7 that’s making all the decisions, programmed by humans who know how to make it work for profit, and it’s been going on for years and it’s whittling down to where’s little more they can take.  This is what keeps inequality growing and to have a head of such an important agency that is not comfortable crossing these lines to get to the bottom frustrates everyone.  I’ve told other lawyers, you focus on verbiage while the computer code runs hog ass wild right behind your head and you can’t see it.  You can read every day with Nanex and the code hosing that goes on with markets and what do we have over there, same thing a lawyer that focuses on verbiage, while computer code runs hog ass wild over there.

We have Richard Cordray, another lawyer, same stuff, no algo knowledge and doesn’t know enough about financials and how consumers interact, so same thing, goes after low hanging fruit which is better than nothing but far from being successful, codes runs hog ass wild again.

To put it bluntly, we need in the government in almost all agencies that have “some” data mechanics logic” and this doesn’t mean they have to write code but have “some” technology work in their backgrounds.  You have to fight those banks and companies that have those “corporate algorithm balls”.

I started calling this phenomena “The Sebelius Syndrome” as it played out so big and even the public could see the sad lack of knowledge and confidence here as well with understanding more of how Health IT works.  Right now too at HHS, it’s the continuation of the same thing, a templated operation stuck on stats and can’t dig their way out after being quantitively mentored by United Healthcare on their models for years.  We have ended up with quantitated justifications (for profit in the private world) for things that are just not true and agency heads with no “data mechanics logic” don’t have any other choice to believe what’s tossed in front of them as they don’t know.  In 2009 I predicted the code hosing at HHS that would come around sadly and I wished I was wrong on that one too as I’m the game with everyone else.

Sebelius, Please Not and Put the Smart Folks We Need In Office

If you watch the Quants of Wall Street Video in the footer of this blog and over at the Killer Algorithms page, Paul Wilmott says the same about people that work at banks on how little they really know about the big picture and “they have to believe the quants” as “the quant ARE the business”.   All we have now in healthcare are bunch of algorithms that unlike the market don’t work together and it driving everyone crazy, and again that’s the expertise of insurers as complexities make profits, and bank do that too.

If you don’t take it from me, here’s Bill Gates again telling you about models and the fact that it’s just not math.  We

need this kind of thinking too with the person who runs the Department of Justice, along with being an attorney to mix it up.  Works for me and I’m so far down this ladder though but I do have two heads, former developer (I know code and data mechanics) and sales and marketing, and thus I see and write about so much before it hits.  Just think of what Bill Gates knows and other hybrids like him if I can do that.  CMS and HHS has way too many many models failing all at once right now and it’s scary.

Congress too suffers from the Sebelius Syndrome, many members in that club too, so it’s not just one person, just one person got the name for being so obviously a big show in public about it.  They scare me too as there’s an agency called the “Office of Tech Assessment” they won’t fund to help them with technology either, so what’s up with that?  If I served in Congress I would want it rather than to choose to be “dumb” if you will on these matters.

If we don’t get that badly needed hybrid for a new leader at the Department of Justice, we’ll just continue as citizens as being screwed by banks and corporate America as they will have nothing to fear and the white collar code hosing will continue to reign in riches for them and accelerate the growth of inequality in the US.  Visit the Killer Algorithms page and take in some videos from folks smarter than me and I think you will probably agree too that “Hybrid” is the word to get the right person with the right focus and perception in place that won’t be “code hosed” at the expense of the consumers in the US.  We’re tired of it.

Attack of the Killer Algorithms Videos and Other References...

I have no ill feeling here with Mr. Holder but I’m just smart enough to see that we have way too many folks living in virtual worlds that confuse virtual with the real world and it’s going to be our huge downfall.  So let’s send old Todd Park (former US CTO now looking to help fill federal jobs with good candidates) out to find the replacement, he would be our best bet for this talent search as you won’t find the right person with old cronies and buddies this time as things have changed.    BD

Thursday, September 25, 2014
My Commentaries , Other Items of Interest , Technology