Home » Medically Related » My Commentaries » Stop the Flu Shot Harassment At Drug Stores–I’ve Had It! Put Take the Corporate Data Scientists Off the Flu Shot Model And Give Us a Break..

Stop the Flu Shot Harassment At Drug Stores–I’ve Had It! Put Take the Corporate Data Scientists Off the Flu Shot Model And Give Us a Break..

First of all when you see how convenient it is to be able to get a flu shot today compared to just a few years ago, this is great for consumers.  What’s not great are the employees who are pounding on your constantly, every time you go in the store “have you had your flu shot”.  It’s making me nuts and it doesn’t stop.

There’s plenty of signage around, big signs right on the buildings in my neighborhood, and then there’s signs all over the stores, where 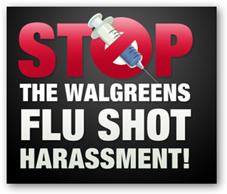 ever you shop.  You can't miss them.  On top of that, the message is repeated on the PA system, so there’s no escape from entering “the flu shot zone”.

Now when I go to check out, and mostly I use cash and have the cellphone turned off, especially if I’m in Walgreens so I don’t have the daily diaper specials circulated to my phone, I get the same thing “have you had your flu shot”.  Now a couple of nice employees in the aisles of the stores before I even get to check out, have already asked me “have you had your flu shot”.  I can read and hear and I know it’s the season but gosh darn, it’s getting irritating.  A few weeks ago a store had the pharmacist standing out at the door when you walk in handing me these bar codes to put on 4 prescriptions to get a $25.00 gift certificate at Albertsons, and I hate those stickers to begin with.

You have a pharmacist that went to school for a number of years to fill prescriptions and why does a company place an educated individual as such at the front door to tackle you with coupons now?

Ok so what data scientist did a model to create this scenario to bug the crap out of customers to increase sales?  I know this stuff is all modeled as that’s what they sit around and do today to squeeze the last penny out of a sale, leave no customer unturned.  I get robo calls too from AARP that I can’t stop and I’m on a no call list on top of that and we know Walgreens, CVS and AARP are all data buddies so I probably circulate through the entire circle frequently and the damn AARP phone algorithm won’t stop.  AARP and Intel just want to dummy you down to where you can’t think much any more with using a tablet that insults your intelligence and they think you can’t learn anything.

Again I’m not putting down flu shots at all here, it’s just let your employees act like people instead of pouncing on customers right and left.  This behavior might work the opposite as this site below exists talking about this same thing so I’m not alone.  As the article suggests below and you use the link to read all of it, the employees and customers are not quantitated up the ass and either get a perk or a threat, depending on the store I think:)

It’s also worth a mention too that United Healthcare in some areas gives out perks for Walgreens pharmacists as well, so you might be hit with something additional there as well and end up having diabetes with web data, even if you don’t.  Bloomberg did a story on that today as more flawed data with some of these stupid models that failing keeping getting shoved at us.  Companies need to balance the marketing and the consumer “shove” as we know the companies are really after the data they can get their hands on to sell.  BD

"I get my scripts filled at Walgreens so they know me real well at the one I go to," one reader told NaturalNews. "When I was pregnant they kept trying to push one on me and I kept refusing them."

Several readers who say they are Walgreens employees have also reported to NaturalNews -- and requested anonymity out of fear of losing their jobs -- that they were being rewarded with incentives or threatened with reprimands if they met a certain "goal" of pushing a certain number of customers into getting flu shots. "I have been told that I have to push the flu shot on my customers, arrange flu shot clinics at off-site locations and draw up flu shots to give to the customers," one person who claimed to be a Walgreens employee told NaturalNews. They added, "Please don't blame the employees who are asking about the flu shot, they are having their jobs threatened," indicating the existence of a feeling of intimidation by their employer.

"Another employee informed me that they do not receive bonuses but will receive write ups and threats if they forget to ask each customer who enters their stores if they want a flu shot," says blogger Aydan in Oak Park, California (http://aydansrecovery.blogspot.com/...).

"A Walgreen's employee who checked me out yesterday asked if I had gotten my flu shot," reports another NaturalNews reader. "I said no. She pressed me to get it. Then, she added that their entire staff was going to be rewarded with iPads when they met their quota."

CVS pharmacies also appear to be using employees to push flu shots: "I work for CVS and they are making us wear shirts that say get your flu shot today, and [they give a] 50 dollar bonus for whoever has the most sales. I hate my job..." says another NaturalNews reader.