More problems for the VA at the Memphis hospital.  The patient ran out the door and they have not found him yet. 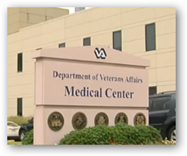 Perhaps if he was there for an appointment, they can find out who he is.

The VA has not released the doctor’s name.  Now last week look at this report where we have the OIG of the Veterans Administration try to use quantitated math to lessen what happened in Phoenix, but you know what, we are not that dumb and we know patients died.

The video states there’s been other issues at the hospital with frustrated patients as well.  BD

At last report the doctor, who was treated in the VA emergency room, was said to be in stable condition.
The VA Hospital is not revealing any more information, including the doctor's name.

"I was coming in the hallway there by the MRI clinic and I seen the guy come running out with a knife in his hand. He dropped the knife, then the nurses run out and said a doctor or somebody had been stabbed in there," witness Ron Parnell said.

Last week police were called the remove a group of vets, including at least one in a wheelchair, from the dialysis clinic when they demanded to know when they would get the treatment they needed.