It was time for a Hitler humor video return and no matter what your opinion is, this is just plain funny! 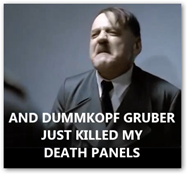 You can find old Jonathon Gruber over at the Center for American Progress where he and Zeke Emanuel help HHS write out healthcare policy anymore because they can’t do it.  Gruber can stay at the think tank if he wants until he’s 75 as that’s when his buddy, Zeke Emanuel says we don’t have any value anymore and he wants to kick off at that age thinks you should think that way too.  There’s quite a few former and current United Healthcare folks that check in and out of that think tank too, so there’s why Gruber’s buddy Zeke, is just a walking/talking commercial for United Healthcare.  Lois Quam is a big one that was at the think tank for a while and probably was the door opener for the rest to walk in over the years so there’s your connection with impact of a big insurer right there with US Healthcare policy, lobbying there too.

Read from the page if you like about Gruber’s model he created to try to match the CBO on their projections, so when it comes to models, right there he’s working one to fit the CBO and whether or not it’s a good model or not, we don’t know but it’s what Congress uses so Gruber comes along and replicates it.  There’s the plan from 2013 and it’s not about pursuing a new model, but rather matching one the Congressional Budget already uses, so nobody here is going for accuracy with a model at all, just match up and get things moving. By the time the CBO breaks down the model so members of Congress can understand, it might end up with a very simplistic spreadsheet:)

“We used the Gruber Microsimulation Model, or GMSIM, to model the impact of a 16 percent reduction in premiums for plans in the individual market. Microsimulation modeling uses evidence from health economics studies to model how individuals and employers respond to changes in policy or the environment. The Congressional Budget Office uses the same type of modeling.

The GMSIM is designed to closely match CBO estimates that have been released to date. While our estimates are not guaranteed to exactly mimic what CBO would find for a comparable reduction in premiums, our findings should provide a reasonable approximation of CBO’s findings.”

Overall though it’s almost impossible to work with insurers at some levels as they have take segmentation to hilt with hiring armies of Quants as they want their business to be purely quantitative for profits and the whole idea is to take health expenses and share it over a large enough group of people so all share in the cost.  That’s how insurance was created to begin with , but again segmentation with insurers is not letting that happen and I realize they have scrutinize and look at costs and so forth too but they don’t do a darn thing with hammering more on pharmaceutical companies either.  United doesn’t care much on that end as they own their own pharmacy benefit manager subsidiary that sells drugs, which is part of Optum and formerly names Prescriptive Solutions.  So what do you do with that monster in the room, conflict?

Speaking of economists, this is one of my favorite clips on economists from the #1 financial quant/mathematician in the world and Gruber is and economist and put Larry Summers in here too for this definition of “economists”..”they don’t have laws…they build up this theory of what they call a law and they get all the nonsense coming out of it”…who needs economists I say:)  The Hitler video really is pretty funny!

I prefer to deal with the honest Quants that tell you “exactly what’s in the model” and let others replicate it, so you can see here Gruber was trying to replicate what the CBO would understand or mirror what they had in order to get the law through.  Models are complex and I would like to see Congress themselves get themselves an install of IBMWatson to help their modeling out and I could bet the CBO would love to have that capability too.  BD

Take a trip on over to the Killer Algorithms Page and listen to some Quants/Mathematicians and other smart people tell you how you get duped if you want.  It’s a battle out there.