One reason for the comeback is there’s more seniors now out there but there’s to it than that.  True many folks have done a reverse mortgage but this goes one step further in now there’s someone waiting for you to die.  How the investments are handled are different, and many are selling their individual life insurance policies, so for the rest of the family if there’s not a lot of money around, there goes any inheritance. 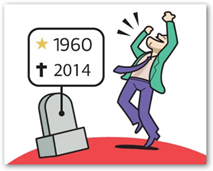 The investor assumes the policy, makes the payments and gets the surrender when you die.  Who owns the policy now can be a big deal as with the way the economy is going, nothing is beyond exploitation either.  What is bothersome though now is to see hedge funds in on this action as they are not always known for have the best ethics when it comes to money.  You have pools now of people with diseases to choose from and they need the money to pay for medical care as we all know medical bills is the number one cause of bankruptcy in the US so there’s another reason for the rise in this activity.

There will be more need for money for assisted living costs.  These types of policies are also called “Death Bonds”, creepy name I know.  We keep hearing about the expensive costs of cancer drugs and treatments and insurers have figured out even more crafty ways to shift costs back to the consumer so where’s the money going to come from?

“A person looking to sell their life insurance policy usually seeks out a broker, who will find three competitive offers from buyers of the life insurance policies. The broker is compensated once the sale is final, and at least a 2% commission will be charged. The policies that are being bought have a minimum value of $250,000, but that number has been coming down since the popularity of life-settlement securities has taken off. “

Those who buy are in essence profiting from someone’s death.  These are different policies than the “dead peasant” policies that companies basically do the same with and that practice has slowed down a bit due to public criticism.

So now that people are strapped for paying for healthcare bills again, life settlements is seeing a revival as it’s one more source to tap for many.  BD

WASHINGTON – The life settlement (LS) market is reviving after a four-year substantive decline, and there is a place for this niche market in the long term, according to an industry expert.

One key factor driving LS market growth is the expanding elder age population, which is increasing the potential market for life settlements, said Rajiv Rebello, a principal at Colva Insurance Services in San Diego. He said that the over-65 population, a key LS market, is expected to increase from 42 million in 2012 to an estimated 70 million in 2030. “The expanding elder age population increases the LS potential,” Rebello said.

Also important to the LS industry is gaining the trust of both potential investors and owners of life insurance policies after the debacle that followed the 2008 severe economic downturn, when investors found that the mortality projections on which they based their investments were wildly inaccurate. A critical issue here, Rebello said, is accurate mortality predictions based on the policyholder’s age and the investor’s profit expectations.