You can read below what the insurers said in their comments.  Cigna and Aetna pay the doctors the same on whether or not the plan is sold on the exchange or not.  In California Aetna doesn’t sell any more individual policies any longer and before the exited last year they were already the 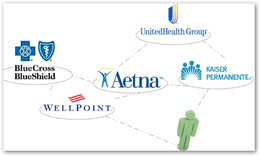 lowest paying.  I don’t know much about Cigna.

Now look at United Healthcare, they pay doctors at rates “above Medicaid” but “below Medicare”.  United also pulled out of California for individual policies last year so that doesn’t apply here unless they happen to jump back in but I have not heard anything to that effect.  Doctors in California on other United plans already complain here in California that due to complex contracts with employer and other insurance such as Medicare Advantage, that they too get paid at rates less than Medicare.  So in states where United insurance is purchased via an exchange, you know your doctor is being paid somewhere between Medicaid and Medicare rates, and that may be why it could be difficult to find a doctor as that’s pretty low.

There’s also the issue of the cheapest plans requiring more out of pocket to be paid for the patient as well and doctors are having to take more time to explain and help patients in that area as well.  Also sometimes patients find their doctor in network but then the hospital where they practice is not covered and that issue is one that is growing as there are separate contracts for both.  BD

Now that some people finally have health insurance through the Affordable Health Care exchanges, many are running into a new problem: They can't find a doctor who will take them as patients.

Because the exchange plans often have lower reimbursement rates than commercial plans, some doctors are limiting how many new patients with the policies they will take, physician groups and other experts say.

To prevent discrimination against ACA policyholders, some insurance contracts require doctors to accept their exchange-plan patients along with those on commercial plans unless the doctors' practices are so full they can't treat any more people. But lower reimbursement rates make some physicians reluctant to sign on to some of these plans or accept too many of the patients once they are in the plans.

Kleinman says his members complain that rates can be 50 percent lower than commercial plans. Cigna and Aetna, however, say they pay doctors the same whether the plan is sold on an ACA network or not. UnitedHealthcare spokeswoman Tracey Lempner says it's up to their physicians whether they want to be in the exchange-plan networks, which have “rates that are above Medicaid.” Medicaid rates are typically below those for Medicare, which in turn are generally lower than commercial insurance plans.

Plans sold on the exchanges with the lowest premiums require consumers to pay the most out of pocket. Many of these customers have insurance for the first time and don't understand how much they have to pay, so doctor's offices have to spend a great deal of time explaining benefits packages, says Ripley Hollister, a primary care doctor in Colorado Springs.