Home » Medically Related » My Commentaries » Technology » It Comes Out in the Wash, CDC Chief Used to Working With and Pushing Broken Models at Consumers–Remember The “Big Gulp” Model? Well Guess Who Wrote Policies On That Failed “Proof of Concept” That Couldn’t Play in the Real World”…

It Comes Out in the Wash, CDC Chief Used to Working With and Pushing Broken Models at Consumers–Remember The “Big Gulp” Model? Well Guess Who Wrote Policies On That Failed “Proof of Concept” That Couldn’t Play in the Real World”…

Here we go again, yet one more person in government suffering from “The Grays” and confusing virtual world values with the real world.  I love to use the broken Big Gulp example as everyone can relate to it as Bloomberg got soaked on his proof of concepts beliefs there and now we find out that Frieden came in and wrote policy for the broke Big Gulp model! Heck New York couldn’t win on that one with money and influence with Bloomberg being sucked in with the statistical models, and then this guy comes along and writes the policy for it.

Lot’s of fun and frustration when people don’t know when to quit and hold up the white flat with broken models today. It can be a lot of work writing policy for a “broken model” I might think:)  You end up sometimes with some very spurious correlations.

By the way if you like satire, visit the page by the same name and create some of your own and you might be reminded of what you see in the news today with number crunches, oh those spurious correlations with data scientists working over time:)  Hey let’s find out the real run down on the per capita consumption of cheese as correlated to those who die getting tangled up in their bed sheets:) A very smart student from Harvard created the site.  You have to mathematically determine if correlations really exist and here’s a bunch of nonsense of when the folks don’t include the “why” with value.

Spurious Correlations - Per Capita Consumption of Cheese As Correlated With Number of People Who Died Tangled Up In Their Bed Sheets! I Found Where All These Obscure Studies Originate:)

When it came to Ebola, there was a lot more policy to be written of course other than just getting rid of a larger cup.  Folks like this are are a danger and it goes all the way up to the White House, Obama and Biden, and the email bot that comes out of the White House too.  Again, I call it “The Grays” to where folks can tell what’s virtual and what’s the real world and further whether or not to use a “virtual” or “real world solution.  Well Ebola is the “real” world so nothing virtual was going to work here.  I wrote this post a while back on that topic based on what I have been observing in the world today. 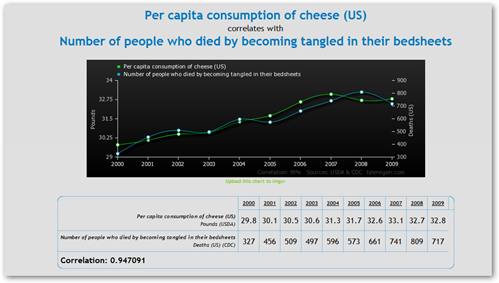 Health Department so he took the easy things that work with PR, transfats, smoking and more, so according to this article this is where his best expertise was.  He didn’t do too well with the flu and ignored some requested policy in that area.

So long and short of all of this, well maybe we had one more living in “The Grays” for too long and I’ll tag the Big Gulp campaign right to his tail with pushing Big Gulp and Bloomberg too:)  They just didn’t know when to stop shoving a broken model down the throats of consumers.  Data Scientists and Quants do get that way with their models and someone once in a while if they get off base has to come in and say “no” as they are not Gods.

CDC Is the Latest Government Agency Caught Up In Virtual Values, Confusion With The Real World Problem of Ebola–“The Grays” Continue to Haunt Those Who Can’t Tell the Difference…

Seriously we need to either get these folks to spend more time in the “real” world and drop out of their virtual values when the addiction takes over or can them if it’s that bad.  Well I guess when we look at where he came from and where he got his basic training, did politics speak louder than the virus?  You decide.  BD

The chief of the Centers For Disease Control has come in for much criticism for his response to the Ebola crisis, but his current ideas might not be so surprising in light of the many political crusades in the form of "health policies" in which Thomas Frieden has engaged.

As City Journal's Steven Malanga reports, CDC chief Frieden has spent the last decade crafting government policies to attack smoking, transfats, and other dubious "lifestyle diseases" instead of, for instance, focusing on bio terror threats like anthrax and Ebola, or crafting policy to treat heart problems and cancers.

In 2001, only months after the Twin Towers fell in New York and during the same time Americans were on guard against anthrax, Frieden interviewed for the position of New York City Health Commissioner.

In that interview he was asked what his priority would be if he got the job. Instead of worrying about terrorism, bio terror, heart conditions, food borne illness from local restaurants, or cancer, Frieden said that his big priority would be to attack the tobacco companies.

Once he took on the NYC health position, Frieden began to initiate polices that offered increasingly "outrageous solutions to health problems based on few facts," Malanga wrote.

These dubious political campaigns were the soul of Frieden's tenure as NYC Health Commissioner and led to other health policies, such as Mayor Bloomberg's ban on large sodas