Home » Insurance » Medically Related » Other Items of Interest » So What’s the Future With Guns and Healthcare? Will Doctors be Required to Do “Gun Risk Assessments” On Patients Next?

So What’s the Future With Guns and Healthcare? Will Doctors be Required to Do “Gun Risk Assessments” On Patients Next?

Of course we had to ask this question as with complexities, if a doctor should decide to turn information over to the FBI on a patient, there will be a need to substantiate reasons of course.  What even makes this even more interesting is the fact that none of the medical records can be used.  That’s pretty much how things operate in the US with the current quantitated justification system that the White House, HHS and CMS subscribes to.  Take a look around and see all the other “scoring” mechanisms in place that are using data and math scores to predict what you will do.  The problem is, they are not accurate.  I’ve spent a bit of time talking with doctors and pharmacists that time and and time again that struggle with the “scoring” flaws all the time.

So even if a patient doesn’t talk about guns, want a gun, etc. will they be given a “gun risk assessment” now.  This is how everything works as there’s big money to be made and some Heatlh IT company will jump on this one to have a software as a service 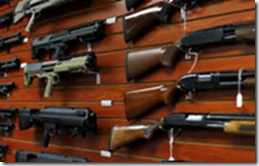 “gun assessment” for doctors to use.  Just wait and see.  I’m saying this as it’s a pattern and I used to write software and once you know some of the data mechanics logic, it’s not hard to figure out.

It’s not like there’s “no” avenue for doctors to report a patient they have real questions about now.  What’s the deal with going direct to the FBI?  FBI going to have some questions on why the doctor is telling them about a specific patient as well, you think?  I have no problem with background checks for ownership of guns, and sure they can be a bit more elaborate than what we have now.  It’s just that I have watched this White House Adminstration and all they do is capture numbers and the President seems to be sold on this 100% anymore.  You also have United Healthcare that wants to grab up any mental health management areas they can.  Kaiser out here in California when they were fined for not providing enough help, signed a contract with the Optum division of United Healthcare so don’t forget their involvement in view of the almost 400 subsidiaries they have, and all are not involved with insurance, but rather management of your care.

United would love to add a “gun assessment” software application that someone would have to pay for to make this work and rake in all the money. They also have their mental health issues.  If you want to read about some cronyism in government healthcare you might not be aware of, check out this link.

So this is what we have forming here, yet one more “risk assessment” some software and/or insurance companies can now make money peddling.  We already have the 6 degrees of Bob Rubin, with Secretary Burwell running HHS and Andy Slavitt, a one time Goldman Sachs banker and more running CMS.

The US government loves risk assessments and publishing numbers, and they don’t really care about the health and care of US citizens.  All you have to do is read a few of Secretary Burwell’s tweets on Twitter and that’s about all she states is that she believes number will cure everything, and that’s in between the multiple selfies posted so we don’t forget who she is and what she looks like I think.

Then we come down to the ONC division of HHS who’s responsible for HIPAA policy and what do we have there?  A former United Heatlhcare lawyer writing HIPAA healthcare policy, so we lose again.  We all know by now probably that Loretta Lynch used to represent United Healthcare with their anti trust lawsuits and so it’s probably not on her agenda to even look at what’s impacting the consumer with health insurance.

So again, being I used to write software and have written on this for quite a while now, watch out for “gun risk assessments” to show up and companies to profit from it, while the data is flawed and of course we will lose access based on how the context plays out.  Actually go down to the bottom of this page and watch the first video from Mathematician Charles Siefe at NYU and he’ll tell you all about how you are duped over and over and over with numbers.  It’s a real eye opener and helps you become a skeptic when you need to be one, or use the link below.   BD