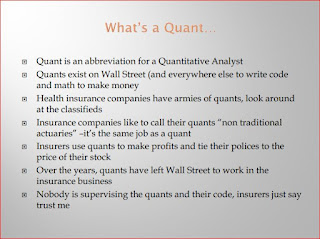 If you have not seen the latest with these two, take a look at to how they want to use segmentation for profit.  It is so much of a "One Trick Algo” World out there anymore, the can’t hardly create enough bullshit commentary to cover up what’s really going on.  These two have been doing stuff like this for years, as I’ve written about a lot of it during the active years of my blog.  Way back in the early days of small developers creating EMRs before the government got involved, there were many of us that just sat back and wondered why the AMA always showed full on preference for anything United Healthcare (namely the Ingenix subsidiary which was being run by former CMS director Andy Slavitt at the time) came out with.  It just went on and on and you too can search in the web’s archives and find a lot of it, as well as just searching my blog for that matter.  AMA has been making money selling Ingenix (now Optum) coding books forever on their site.  Here’s a link from 2010 below as an example of the cushy AMA/UNH relationship over the years.

Now we have this data plague as I call it of an issue of Excess Scoring.  I wrote about that a few years ago as our entire country is totally whacked out on the fact that everything needs to be scored, and that’s not true at all, some of the best things in life are NOT scored.  Here’s some back links.

Actually when I was communicating with a former CMS executive about this, they said it was right out of United Healthcare's 2010 report, the stratification report, which also went way over the top on telling people how UNH thought they should raise their kids and indeed this is right on the same line of thought with these ICD Codes.  Doctors, nurses alike think the the AMA and United Healthcare are out of their minds and can see especially with Part D, its a way to lop on more risk so UNH can bill the government more money, called RISK FIDDLING.

So get a load of this nonsense on how the AMA and United Healthcare want to code you, so they can use the result sin run you through a ton of other data bases to deny or allow access.  That’s what this is all about if you haven’t figured it out yet.  You should also know that once you get coded or tagged with this nonsense coding and US caste system type of scores, that it never comes off.  You will be stuck with one of these balls and chains forever, so hey WTF, let’s score everyone with Z60.82 for Inadequate social interactions.  This is such a piss poor model that I bet even the Quants that created it must be cringing, you know they don’t have to like or believe all the crap their employers want them to do but they have families to feed. 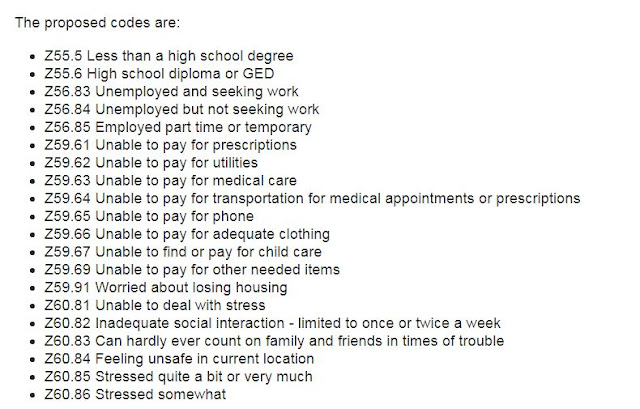 You are already getting the crap scored out of you every time you fill a prescription, and yes it’s the PBMS using this scoring system that was created with Ingenix algorithms that were sold to Express Scripts in 2010, yeah another Andy Slavitt algo game for cash, as UNH made him and his former partner, Senator Warren’s daughter, Amelia quite wealthy in 1999 when UNH bought their company, which was basically nothing more than a script discount operation and they made money from the PBMs.  So here’s how the pharmacists are directed to “score” you or they can lose their jobs.
Patients Who Pay “Cash” When Filling Prescriptions Are Now Called “Outliers, Pharmacists Required to Fix Outliers as They Show Up As Non Medication Adherence Compliant With 5 Star Systems Full of Flawed Data…
The bottom line here is that the AMA and United Healthcare are making complete fools of everyone thinking that some brainchild coding is going to change anything, as it won’t, it will more than likely end up costing more money as of course it will end up requiring software updates, right…LOL…and the AMA will get paid royalties for creating new CPT codes that will have to go along to match the ICD diagnosis codes so doctors can get paid to throw you under the Bad Algo Coding bus where you will not only see potential limitations in care today, but this will follow you forever and make it harder for you to jump through more algorithmic hoops that the Quants will model.  If you’re not getting this, then watch my video at the link below and then continue on to watch the 4 videos from others and see how far down in the algo toilet you might be.

Algorithms, Scoring Metrics, Privacy and more in today’s Healthcare business world–The Healthcare Algo Cartel
Again I’ve been writing about algo abuse and and cheating code for years, and it’s happening everywhere, as with software you can do something about anything, create little virtual worlds where folks function and create new little virtual values, but what happens when the real world comes knocking?  The dupes sadly go click on One Trick Algos for even a deeper saturation of perception deception.  That’s what this coding BS for care here is all about and somebody needed to say it, as they are virtual values that will not end up helping you one bit, but the AMA and UNH will profit royally as they have practices algorithms deception for years.  I think today it’s only 15% of the MDs in the US are members of the AMA, so many have dropped out as it’s more of a lobby for money now versus representing doctors in the US and this movement has been going on for years.  UNH is and has been the king pin for Quant modelers for years so everything modeled mathematically from that corporation needs extensive scrutiny as it geared for shareholders first, patients second, the massive number of algorithmic subsidiaries tells that story well.

We need to index and license ALL data sellers so we can get an idea of what’s really going on in the black box scoring algorithms executing code unknown everyday, and remember we just see the front ends so remember there’s a whole other reality in how those algos collect your data, score you, screw you, etc. for the sake of corporate profits.