Home » My Commentaries » Other Items of Interest » Technology » World Economic Forum Needs A Dose of Bill Gates To Help World Leaders Comprehend Where Virtual Software Worlds Work and How To Unite With the Real World, Too Much Math In Financials-Nobody Seems To Understand The Mathematical Causes and Effects Of Economic Complexities… 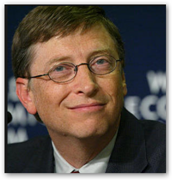 and I hear the same thing from the CEOs and others talking.  I truly do hope they can overcome this as the world depends on it.  We have so many models, so many analytics programs that claim to give you what ever information you need.

Predicting the future…with financial markets…things can’t be predicted in an absolute sense…there are some that foolishly rely on models…this is part of the problem…so here’s a little dose for the banks who are attending…they won’t want to talk about it, that’s for sure…

We also have quantitated justification and this has been used for many years and with steroid marketing today and the belief that those numbers have to be right, gets us to where we are.  Bill Gates and his Foundation gets this as he’s brilliant, he can model, he can code and he also had to be human to raise a family and thus he attained balance and knows good and well where virtual software worlds begin and end and how to use them to create tangibles that save lives.

Here’s a clip from Paul Wilmott, very entertaining too, “CDOs are fantastic instruments”…he explains errors and the shrinking profit margins and no margins for error..this is why the models are not working anymore..he warned about the dangers about credit derivatives..

The real world can be just dirty in the words of Paul Wilmot…he reads the Hippocratic code of ethics for Modelers that he and Emanuel Derman wrote…people can use the models to hide risk…and if there’s no other message that comes across with economics talks that is the one, and it’s been done..watch below.  He continues on and says finance has too much math…and if we are going to simply things today, we need simpler models which will result in simple computer code and algorithms and other than the ones who profit big from complexities, I can’t think of anyone who doesn’t want that…banks have outstripped all other businesses..

Change the math to make it look less risky..this is where we need to go and hold folks accountable..when you have too much math it’s difficult to see where the mistakes are..anyone, Nasdaq, Knight, Goldman, and a few others out there with code on the markets when talking errors?  Change the math not the portfolio…how it’s done…banks are just big software companies and the CIO of Bank of America will tell you that, it’s their business.

So will they address this at Davos…the real world as quantitated algo duping continues…moving money and makes many a lot wealthier…all through the world of math models that the average consumer can’t even understand or begin to deal with such complexities?

You can watch the entire video in the footer of my blog along with 3 others that help educate you a bit on what’s really going on.…BD