surgeries, meds, allergies and so forth before talking to the patient.  We live in the information age and this was created by a doctor who of course saw the value of having information rather than playing a guessing game with memory or having to go through other procedures to get his/her hands on the medical records.  If they are in an office, on paper, well we know what that would mean for sure.  The article states it will work with any EHR and the information is migrated to the application once the patient gives permission and is that not a breath of fresh air, patient give permission, the way it should be.  A patient only version is coming out soon which is basically a PHR that the patient can use whether or not their doctor is or is not.  The after hour patient calls are forwarded  and the app records, archives and transcribes them.  I like that part as even with just my cell phone I have that now with messages. Patients are informed that they are being recorded.  At $29.95 a month it won’t break the bank either.  I try to put what I feel is something that is usable on the blog and this certainly fits the bill it appears. 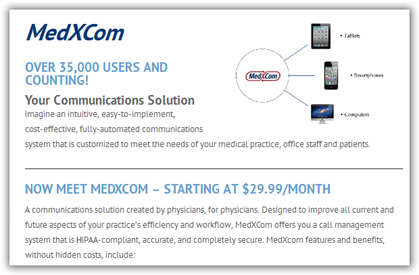 You can also e-prescribe through the software and do referrals with doctors who are also using the system.  I am guessing this is modular and service levels, depending upon what is chosen might raise the price a little as it appears you can use as much or as little of the features as desired.  BD

Michael Nusbaum rarely thought twice about giving his personal cell phone number to patients after he operated on them. Nusbaum is a

bariatric surgeon at New Jersey’s Morristown Medical Center, and he wanted patients to be able to reach him easily by phone or text. But then he found out that sending text messages to patients violates federal privacy laws. Whenever patients texted him, “I wouldn’t text them back,” Nusbaum says. “I had to pick up the phone and call them so I wouldn’t violate the law.” If a doctor is subscribed to MedXCom, after-hours calls get forwarded to his cell phone instead of an answering service. “Before I speak to you, it will push your entire health profile to my cell phone,” Nusbaum says. “I can see everything—what surgeries you’ve had, what allergies you have, the medications you’re on. I have all that information even before I take the call.” If the doctor wants to order a prescription, he can do so right through the app. MedXCom is designed to work with any EMR. When patients agree to use the product with their doctors, their EMRs are automatically migrated into the app. Patients can then add information to the app, and they can scan and upload paper records from their visits to other doctors. They can also sign up to get reminders of routine checkups for themselves or their kids by phone or text, and they can use the app to schedule appointments. Giffen charges physicians an average of $49 a month to use the telecommunications features of MedXCom—far less than the $250 or so they would pay per month for an answering service with a live operator, Nusbaum says. Doctors who opt out of the telecom services can still use the EMR features at no charge, and everything is free for patients, he says. http://www.xconomy.com/new-york/2012/05/02/giffen-solutions-created-by-fed-up-doc-connects-mds-and-patients/?single_page=true
Wednesday, May 02, 2012
Medically Related , Other Items of Interest , Personal Health Records , Technology