Home » Medically Related » Other Items of Interest » Technology » Professor Stephen Hawking Who Depends on Technology States That Artificial Intelligence Has A Big Danger In Store for Future Human Existence, His Opinion Joining the Ranks of Larry Ellison and Elon Musk…

Professor Stephen Hawking Who Depends on Technology States That Artificial Intelligence Has A Big Danger In Store for Future Human Existence, His Opinion Joining the Ranks of Larry Ellison and Elon Musk…

He uses a speech synthesizer so he can talk to us and talks about why he kept the original voice and now it’s his trademark.  He can’t speak without it.  He was one of the first people to be connected to the internet.  He has his debilitating disease and this is the only way he can function today.  Below is a project that Intel built for him and it has a great video there as well.

He says the artificial intelligence can destroy the human race.  We couldn’t compete and he can also see what it has done today.  He’s not alone as others such as Elon Musk and Larry Ellison have said the same.  Ellison made his speech about the topic way back 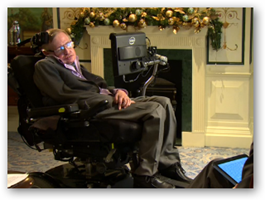 in February and it’s well worth the watch at the Q and A as remember these are folks that are hands on engineers and know data mechanics logic very well.

Myself, yeah since I used to write code and have a God given logic mind anyway, yup I see it all over the place and I have yet to have one person disagree that people confuse virtual world values with the real world and let them escape out into the real world to do damage sometimes as they don’t work there, they should remain virtual.

What we end up with at times are “proof of concepts” that work in the virtual world but not in the real world and people shove and push those models at consumers as they spent a lot of money developing them and eventually everything comes to a halt.  This is not to say they are all bad either as there are good models but again we come back to where people can’t tell the difference and sometimes it’s really bad implementation as well.  In the title below I borrowed a phrase from Emanuel Derman, former Quant and author of a couple good books, “Models behaving badly” is one I liked as he explains.  So when I see a bad model that’s flawed, that’s what I say, “people don’t work that way”.

So Professor Hawking is making his stand in agreement with what others, self included have said here and in my opinion, it’s the confusion and as I said I see it all the time but I think in those modes, in other words is this virtual or is a real world value.  Start asking yourself that question sometimes.  Also I have a page that goes into that topic and a few others with folks smarter than me that tell you how you get fooled with math and other virtual values.  The math is a big one and you see it all the time and we have been so trained to run around like magpies repeating stats to each other so we feel important, and that’s what humans are designed to do all the time, but think about it and observe.  There’s nothing wrong with repeating significant stats either but with some it’s just a habit and some end up sounding like stat magpies, watch it on Twitter and you see it there.

Time to listen up and think about how deep you want to go with virtual reality.  Sure if you are going to play a game and all the lines are defined, you know what you are doing but as this enters into the business world without some kind of real awareness of where it’s allowed to play and where not, watch out.  BD

Prof Stephen Hawking, one of Britain's pre-eminent scientists, has said that efforts to create thinking machines pose a threat to our very existence.

He told the BBC:"The development of full artificial intelligence could spell the end of the human race."

His warning came in response to a question about a revamp of the technology he uses to communicate, which involves a basic form of AI.

But others are less gloomy about AI's prospects.

Prof Hawking says the primitive forms of artificial intelligence developed so far have already proved very useful, but he fears the consequences of creating something that can match or surpass humans.