one of the primary factors.  I think you can almost talk to any physician who has transitioned and hear this issue, why, the learning curve.  Having written one myself and trained a few doctors, I can vouch for that fact.  There’s a lot of cursing that goes along with it too with just the frustrations of having to learn a software system.   Hands down answer with primary concerns – the cost. 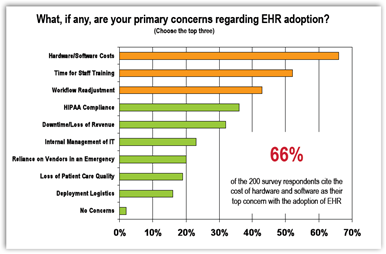 Now here’s something else to look at with this survey, look at the area of security.  30 percent don’t have basic anti virus software protection, yikes and when you can find this for free too, no excuse here for this one, and the part about encrypting wireless networks, yikes again, so be ready for those drive by Google Map guys or much worse than Google.  Actually Google is the least of their worries but last year too we had members of Congress that didn’t password protect their own home networks and then screamed bloody murder upon the chance of some of their data being accidentally collected, go figure.  At home you can’t have the staff do everything for you.

Training is always mandatory and take in as much as one can I always say but again that takes time too, but you will be cursing a lot more if you don’t partake here.

If I were in a practice today though and looking to keep cost down I certainly would be looking at cost effective solutions, like Office Ally or Practice Fusion and not have the problem of having a server at the facility and both are ONC certified so what do you have to lose and they have additional features such as personal health records as well as medical billing packages.  Much of it is free and a few services are very nominal in cost.

Things change so much today and with all the software updates take the easy to use route and collect your stimulus money and pocket more that way instead of going into the red.  You have to buy hardware anyway so that part is a given and CDW works with many to provide the hardware, networking, etc. part of the puzzle for both on premise and cloud or web based services.  BD

VERNON HILLS, Ill. – December 13, 2010 – CDW Healthcare, part of the public sector subsidiary of CDW LLC, today announced the results of a national survey and six-month study on the complete cost of electronic health record (EHR) adoption for physician practices.  The study found that inclusive of equipment, software, services, training time and potential lost revenue, physician practices may face total EHR adoption costs of $120,000 per physician.  The speed with which a practice fully implements the EHR and shifts to the new, accelerated workflow is critical to reducing the overall cost of adoption.

As the primary driver of cost, physicians expect to see patient encounters decline in the year of adoption by an average of 10 percent.  Following adoption, however, physician practices will also directly benefit from EHR-based workflow improvements that enable them to see more patients.

“The most important factor in reducing the cost of EHR implementation is accelerating through the workflow changes,” said Bob Rossi, vice president of CDW Healthcare. “The quicker practices can reach full adoption, the quicker they will reach the positive side of the cost curve.”

In contrast, CDW Healthcare found that lost revenue will be a far larger drain on physician practices than hardware and software costs.  Physician practices said they expect patient encounters to fall by an average of 10 percent in the first year, equating to a total average revenue loss of more than $100,000 per physician.  Although 10 percent is the survey average, nearly 40 percent of respondents said they expect patient encounters to fall by 25 percent or more in the first year, representing the possibility of greater potential revenue loss.

“Survey responses indicate that physicians are worried about the costs of hardware and software components when they should focus on implementing a complete solution that reduces the time lost to workflow changes,” said Rossi.  “While a typical practice will have a greater investment than expected, the payoff will be significant.”

Based upon a snapshot of the average physician practice’s IT infrastructure, CDW Healthcare also identified opportunities to either speed adoption or reduce costs:

Ø Upgrade vs. Replace:  The average age of physician practice workstations is less than three years, with 20 percent less than one year old, CDW Healthcare’s survey found.  As such, practices may achieve better results by upgrading existing workstations with system memory, drive space, backup processes and wireless access points to extend the lifecycle of existing workstation deployments

Ø Protect yourself:  Notably, 30 percent of respondents did not use antivirus software and 34 percent did not use network firewalls.  To protect IT investments and patient information, physician practices moving to EHRs will need to significantly improve their security and business continuity profiles

Ø Train and train some more:  Twenty-two percent of survey respondents indicate that they will spend at least 10 hours training staff to use the new EHR system.  Because training programs are included in the cost of many EHR software packages, practices should take advantage of every training opportunity as a way of accelerating adoption