Home » Medically Related » Other Items of Interest » PolitiFact's Lie of the Year: 'A Government Takeover of Health Care'

I saw this last evening and thought it was good enough for a post on this healthcare blog and perhaps Wendell Potter may whole heartedly agree with this too.  The site

is not saying whether or not they endorse healthcare but they are simply stating a government take over it is not true.  The phrase “A government takeover of healthcare” was used so frequently and some of the instances from the article are stated below and you can go to the website of PolitiFacts as they have quite a bit of additional documentation.

The White House Blog has also considered this big news and you can read their comments at the link below:

If you read below you can see where it was stated 8 times in the GOP Pledge for America which we know was written by lobbyists who created the original pdf and I guess due to lacking some IT literacy with removing personal information the names of the likes of AIG, Pfizer, BP and more were shown as the authors.

This is not an opinion but rather a post about the site created and substantiated from other sources and sites.  The article further says the the Democrats were not able to come up a phrase of their own to combat. The site looks at a number of items and you can sort and choose what you want to look up. This one on healthcare being the winner I guess was used so much in speeches and writing it was too numerous for them to even get a full count. 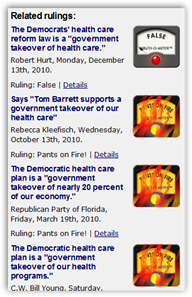 news this might be a site to check back with and one worth a bookmark.  BD

In the spring of 2009, a Republican strategist settled on a brilliant and powerful attack line for President Barack Obama's ambitious plan to overhaul America's health insurance system. Frank Luntz, a consultant famous for his phraseology, urged GOP leaders to call it a "government takeover."
"Takeovers are like coups," Luntz wrote in a 28-page memo. "They both lead to dictators and a loss of freedom."

By selecting "government takeover' as Lie of the Year, PolitiFact is not making a judgment on whether the health care law is good policy.
The phrase is simply not true.

"If you're going to tell the truth about something as complicated as health care and health care reform, you probably need at least four sentences," said Maggie Mahar, author of Money-Driven Medicine: The Real Reason Health Care Costs So Much. "You can"t do it in four words."
Mahar said the GOP simplification distorted the truth about the plan. "Doctors will not be working for the government. Hospitals will not be owned by the government," she said. "That's what a government takeover of health care would mean, and that's not at all what we"re doing."

PolitiFact sought to count how often the phrase was used in 2010 but found an accurate tally was unfeasible because it had been repeated so frequently in so many places. It was used hundreds of times during the debate over the bill and then revived during the fall campaign. A few numbers:
• The phrase appears more than 90 times on Boehner's website, GOPLeader.gov.

By March of this year, when Obama signed the bill into law, 53 percent of respondents in a Bloomberg poll said they agreed that "the current proposal to overhaul health care amounts to a government takeover.”

FactCheck.org, an independent fact-checking group run by the University of Pennsylvania, has debunked it several times, calling it one of the "whoppers" about health care and saying the reform plan is neither "government-run" nor a "government takeover."

PolitiFact | PolitiFact's Lie of the Year: 'A government takeover of health care'