This is a little outside of healthcare but I wanted to include this to once again illustrate the power of algorithmic formulas and how they are being used.  This is a pretty serious offense if in fact it is proven.  Algorithms written by programmers represent a lot of power today and information is moved, interpreted, read and stolen too with formulas. 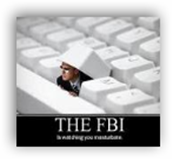 If you dig further into this article you can see where it is a developer this time who is having to defend what he did or did not do as well as a matter of accountability for the FBI.  The programmer welcomes an audit and being that all systems were operating 24/7 during any of his work on the network, it should all be shown, but again too in some instances we have folks who try to beat that too and recently in the news we heard about the case at Goldman Sachs where the accused was found guilty of stealing code.  This situation is like placing a Trojan horse or something along that line to allow access to a VPN.  This is a complicated data situation that the average layman has no clue about the mechanics involved but again hopefully an audit will lead to finding out what really went on, that part consumers do want to know.  The programmer said this was nothing new with saying he had worked on projects to monitor the back doors for the Executive Office and the Department of Justice and 93 US Attorneys.

If you work in the legal area of the US Justice Department, take notice.  BD

A former FBI consultant claims the FBI had backdoors installed in the supposedly secure OpenBSD operating system to allow the agency to eavesdrop on virtual private networks used by U.S. attorneys nearly a decade ago.

Gregory Perry, now CEO of GoVirtual Education, made the allegation Dec. 11 in a personal e-mail to OpenBSD founder Theo de Raadt, who published it three days later on the OpenBSD Tech mailing list.