Home » Medically Related » My Commentaries » Other Items of Interest » Judge In Health Care Lawsuit, Has Financial Ties To GOP Marketing Firm-Judges Need Some “Algo Men” on Board As Advisers to Sort Out Their Connected Interests

There’s also a disclosure that the judge became an early day investor around 13 years ago, but again we might stop and think of how the world is changing and yes 13 years ago they didn’t have the opportunities that technology offers today with

extreme business intelligence for marketing, mining and selling data.  It’s a changed world today and this is what is driving everything.  When the disclosure says he is a passive investor, I can agree with that probably being true as the level of IT consumer literacy as far as what is occurring today is pretty low through out the country.  The judge probably throws dollars that way and just knows it pays him dividends.

We now live in the day of connected data and if you read the papers every day you see insider trading information stories filling the headlines.  Now if one is going to hold a public office and have high responsibilities, it’s time for those individuals to perhaps start taking a look at where they are invested.  The company where the money was invested yesterday is not the same today as with mergers and acquisitions it is hard to identify sometimes with exactly where the profits are generated.  Everything today is marketed for a profit and such companies that do this work invest in predictive business models with software and the algorithms to guide their clients, this is the real world today folks, so the company it was 5 years ago may not be the same company it is today.  Wake up as when the company it is today via transparency is exposed, your contributions will be noticed and you will be associated with those factors, it’s the world we live in today.  I tried to answer some of those issues in a post back in October of this year as we are seeing some very crazy marketing schemes in healthcare and being this is a marketing firm that falls into this category, no surprise this become public news.

Everything you read today is not as it seems.  We use language that somewhat circles around educating the public on technology.  One big example is the use of the terminology of a “circuit breaker” on Wall Street.  Why can’t we educate the public and tell them it is “an algorithm”.  Do you know what the average layman thinks is a circuit breaker?  It’s the item that hangs on your house to control electricity so there are some folks that think this is how it is done on Wall Street to control volumes, send Joe over to hit the switch.  The public deserves better than this and this is part of educating our citizens as to why and how financial and other technology items are affecting daily lives.  Furthermore, this judge should read up on what kind of company he is invested with and review their types of activities.  Does it conflict today with being a Judge?  These are questions one should ask themselves and take time to get educated themselves as we are not in the 70s anymore.  As you can see by the article in the Huffington Post, these items will be disclosed and come up for discussion so ignorance of where your investments are placed is not good enough any more.  As citizens, we are told this all the time with being scrutinized for every action we create and are held accountable from information that is mined and sold about our medications and more.  Let’s quit talking in circles.

A couple lines from the PR website that describes their business…read between the lines if you will to figure out the extensive use of data base information for targets, they will find your supporters for you, as this is how advertising and marketing firms operate in today’s world.

“Banner advertising, search and rich media are just a few of the ways we find them online. These folks are already your supporters; they just don't know it yet.
They are out there. They already love you. Let's go and get them.”

My opinion here is “sorry Judge educate yourself and see where your dollars are going and do some soul searching” as you are in a position to make huge decisions that impact all citizens,  so take control of your own decisions too, this is the age of transparency and people want to know what kind of role models exist and who’s at the helm making these decisions, take responsibility for your actions and being a judge today be aware of the technology world around you and don’t be bliss as you too are also living in a very transparent world, just like the rest of us.  Being a judge, one should be more abreast of this situation than even the average citizen in knowing the law and also being aware of your public image. In the world today Image plays a huge role and there’s no hiding out any more.  If you need help to determine how your data is connected to your investments, go hire that Algo Man today.

It used to be one was known by the company they keep and I think this is still true, but add on your are also known by the investments and public profile that exists today too, just a sign of the times.  BD

But with power comes scrutiny. And as judgment day approaches, a Democratic source sends over judicial disclosure forms Hudson filed that could raise questions about his impartiality. From 2003 through 2008, Hudson has been receiving "dividends" from Campaign Solutions Inc., among other investments. In 2008, he reported income of between $5,000 and $15,000 from the firm. (Data from 2009 was not available at the Judicial Watch database.) 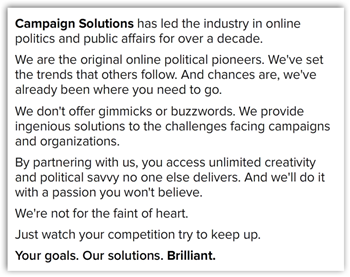 A powerhouse Republican online communications firm, Campaign Solutions, has done work for a host of prominent Republican clients and health care reform critics, including the RNC and NRCC (both of which have called, to varying degrees, for health care reform's repeal). The president of the firm, Becki Donatelli, is the wife of longtime GOP hand Frank Donatelli, and is an adviser toformer Alaska Gov. Sarah Palin, among others.