This is actually pretty funny with Rachel Maddow from MSNBC with addressing the items they need to discuss and/or change.  The first up is looking at the Capitol Green program which is currently saving 20% in energy, see the image no further comment really needed.  They just don’t get it…

Other items previewed is to cut the funding for NPR, National Public Radio and then

there’s the items of the biodegradable forks.  Watch the video for the full explanation on this one.  There’s a few other items included here and this seems kind of crazy.

The abortion bill rider failed and Joe Pitts told the New York Times he was going to tackle abortions once again, what a waste of time with that one as he has already introduced a bill.  Joe Pitts is soon to be the Health Chairman, yikes what a blast from the past and waste of time we look to be facing.  Stick a FitBit on him so he can enjoy some mobile health technology. 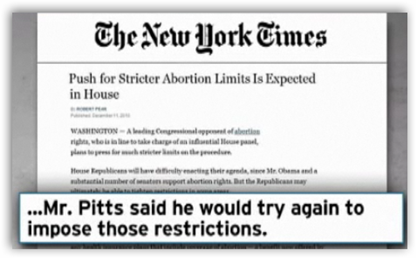 After viewing this video this is a fine time to mention the possibility of members of Congress becoming participants in modern day technology and to entertain getting some Algo Men on board so they can help avoid looking not so smart.   They do

have the other GOP members who didn’t fund Cloud computing either in the Senate so it looks like a real meeting of the 70s minds when they talk about the “Green Capitol” too.

The world is moving around them at a pace they seem almost bliss to recognizing the fact that it exists and to be fair, there are some luddites in the other party too, but the 8 track tape guys are up to set the stage it seems to keep the US from moving forward.  Then of course there is this topic where most just think all this time and expense grows on trees….they just don’t get it…..BD

Talk of Repealing Healthcare Law–How About the Expense of the IT Infrastructure Algorithm Resets And Costs That Would Be Required?