We live in a strange society today with sometimes trying to find what is normal and this show seems to go to the edge to find out what is not normal.  The video with

the woman addicted to her “blow dryer” is a scream, and you wonder if this was not made up for the show, at least I felt that way.  There some other strange folks here that eat cleanser (didn’t know if it was Ajax or Comet)and eat toilet paper and they have some issues that could affect their health.  The sad thing about some of this though is that insurance companies here and there are cutting mental health coverage from some of their policies.  BD

A new TLC show called MY STRANGE ADDICTION  is a series of compelling stories of people battling strange, obsessive, and addictive behaviors. MY STRANGE ADDICTION premieres this Wednesday, Dec. 29 and runs until Feb. 2011.
Some of the addicts - and strange addictions - featured over the course of the series include: 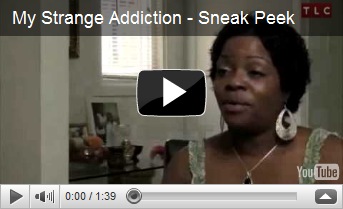 
The series allows viewers to explore the bizarre ways these individuals cope, as well as the often relatable stories that led each addict to where he or she is now with addiction expert Dr. Mike Dow.