The Caitlin Raymond International Registry for bone marrow donors is run by the hospital and when all the insurers started seeing a growth in the number of claims, well folks stated looking.  The models are now unemployed there and more investigations are ongoing. 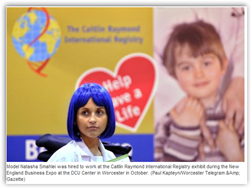 The free testing involved finding a DNA match to see if there is anyone out there who is a match, but they have to also be aware too that if they are tested, the volunteers need to be available too.  The Caitlin Raymond registry has 185,000 potential donors.  Now here’s where the charges get sticky, if the person’s employer does not have a negotiated rate, the charge for the test can be $4000.00 per person, but most were between $700 and $1500.  The models were making good money it appears as the tab to the agency was around $40-50k per week.  That’s a lot of money.  The good new is that they generated a lot more donors but did they make profits doing it I think is what everyone wants to know.  BD

Using models is the oldest trick around and you see this still done at conventions and I have seen it done at HIMSS too in past years, so it still works obviously.  BD

But it was not until this week that one reason for the surge in claims became clear: The Worcester hospital hired models who wore short skirts, high heels, and sometimes sported neon blue wigs to recruit bone marrow donors at malls in Massachusetts and New Hampshire, Red Sox and Patriots games, and flower shows.

Harvard Pilgrim Health Care officials said they saw claims from UMass Memorial nearly triple in 2009 to 2,922, costing the health plan $1.5 million and prompting it to negotiate “a significantly discounted rate for this testing,’’ which went into effect last January. This year Harvard Pilgrim estimates that claims from the hospital for bone marrow testing will balloon to 9,621 by the end of this year.