We would all like at some point in time to have simpler and easier to navigate insurance policies to choose from but with the way the business has built upon itself, that doesn’t look like it will any kind of reality in the future as it would stand to put a lot of “portal people” out of business instead of having consumer friendly

models.  The portal folks have to exist due to the complexity of health insurance and yes they do hopefully make it easier for us and employers to display on screen on our computers an easier way to navigate, but what we end up with are more algorithms that someone ends up paying for, and guess who is the end result there in the long run, us.

This was an interesting article in Xconomy about a couple portal companies and the big amounts of money that VC and other investors sink into them.  The know the complicated issue of finding health insurance and thus they place value here as well as some big dollars, but are those dollars really worth what is being sunk in here?  We do need portals in healthcare for various reasons, but it is also a business of algorithms that feeds itself.  When insurance exchanges come into being, well guess what will be needed, more portals so the average human can find screens on a computer that they can use and get answers.  As employers try to make it easier for employees to figure out their benefits and health insurance provisions, once again we have more portals and these folks with their algorithms make some big bucks.

Todd Park, prior to working at 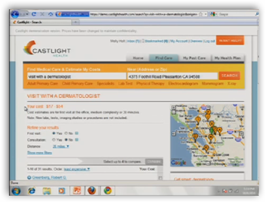 CMS worked at a portal company, Castlight and was the co-founder so perhaps this is why the Medicare.Gov site has such a nice new portal design as you would guess he had some ideas going in there and again the same applies, complicated and complex insurance policies need portals for the average human to work with. In addition, Todd Park was also the co-founder of Athena Health and as far as I know still remains only on the board after being worth $25 million after the initial IPO, so I guess his salary at CMS is not much to worry about.

Back on course here, you can see how profitable the aggregation of data is when modeled into a portal which depending on what kind of portal you are speaking of you may end up with physician information included to be able to find a physician for the cost one would be looking for.  The focus of Compass in this article is to get the prices to the consumer.

We would have a few less millionaires if every doctor and hospital charged the same for each procedure and perhaps even some simpler portals to use too.  Again as mentioned, this business feeds itself in a matter of a year to 2 with more information needed as the complicated formulas arrive and we need portals to put on top of the existing portals, all making this data flow through screens you and I used on our computers.

If we had a standard set of procedure charges across the US this is one aspect of the portal business (and the money we pay for it) that could go away and save a lot with healthcare, put it back into treating the patients and that would leave one less area to where algorithms would have to run and be paid for by us.  In a related story, CMS awarded $42 million for a company to develop portals, not this exact type, but portals working to report national data queries.

Keep your eyes open for the portal guys as I have a feeling we will be seeing more millionaires in the near future that provide this services via writing and marketing new data aggregation algorithms, it’s all about those algorithms that make millions in profit with programmers in this era for those that are ready and willing to write them for the ultimate potential millionaire achievement, and thus this hidden area of where value is seen will continue to keep the cost of of healthcare IT services rising.  When you look at the dollars invested by VCs in this technology it’s no wonder the services have to cost so much and in some areas we get back to transaction fees once again that can go cha ching, depending on how many areas the portal is designed to access for information.  BD

The company introduced its service in January when it activated its first customer, the City of Manchester, NH. The firm has since brought on the city’s teachers, New Hampshire state employees, and seven other employers in the state. Though most people aren’t accustomed to comparison shopping for their healthcare, the firm says that some 50,000 people who are eligible for its service are already saving their employers more than $100,000 this year in medical costs. For their efforts, people who use the service and elect to get their service from a certified provider are given an incentive payment of $25 to $100, according to Compass.

Compass is among a growing number of firms that is offering services to shed more light on the costs of healthcare—including Castlight Health and Change:healthcare. They aim to add a dose of transparency that many believe is needed in the system. For now, Compass is focusing on about 36 elective diagnostic tests and procedures such as hernia repairs, CT scans, mammograms, colonoscopies, and MRIs. Its customers can use its service and qualify for rewards if they chose from a list of providers that qualify. In addition to the reward payment, choosing a lower-cost provider can save their employer money and, if they have a high-deductible health plan, lessen their own financial burden.