Initially the intestinal tissue cells and the growth there of will be used to study normal intestinal development in humans and what goes wrong with the intestine in people with diseases such as enterocolitis, inflammatory bowel disease and short 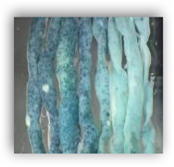 Eventually the process will lead to growing intestines tissue for implant and testing on animals will begin soon.  Within 28 days major intestinal cell types were developed and took on the characteristics of absorptive and secretory functionality of normal human intestinal tissues.  BD

In a study posted online Dec. 12 by Nature, scientists from Cincinnati Children's Hospital Medical Center say their findings will open the door to unprecedented studies of human intestinal development, function and disease. The process is also a significant step toward generating intestinal tissue for transplantation, researchers say.

"This is the first study to demonstrate that human pluripotent stem cells in a petri dish can be instructed to efficiently form human tissue with three-dimensional architecture and cellular composition remarkably similar to intestinal tissue," said James Wells, Ph.D., senior investigator on the study and a researcher in the division of Developmental Biology at Cincinnati Children's.

"The hope is that our ability to turn stem cells into intestinal tissue will eventually be therapeutically beneficial for people with diseases such as necrotizing enterocolitis, inflammatory bowel disease and short bowel syndromes," he added.

Because iPSC technology is new, it remains unknown if these cells have all of the potential of hESCs, Dr. Wells explained. This prompted the researchers to use both iPSCs and human embryonic stem cells in this study so they could further test and compare the transformative capabilities of each.