I guess the question is anymore is “how bad do you want to be a doctor”.  The red tape and what insurers and CMS are calling for is not improving care very much at all but rather it’s serving to increase the profits of a lot of Health IT vendors, in this case it’s McKesson with 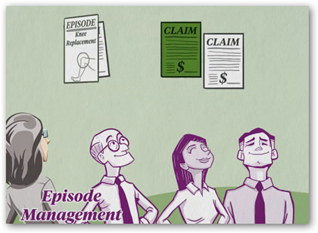 their systems they use.  Just a couple days ago we had this to where Covered California insured participants are getting screwed on privacy with no opt out on being “scored” again and all these so called “scores” which eventually end up denying care or money are going to CMS.

Covered California Insurance Participants to be Risk Assessed With Individual Scores To Be Sent to CMS By Anthem–Appears To Be No Opt Out For Privacy, Payback Time For the ACA Subsidies As Feds Get Your Scored Data

It’s no mystery anymore that when insurers change reimbursement procedures, it’s about a 99% chance these policies will end up paying doctors less.  It’s been going on for years and was first made popular by Ingenix, the subsidiary of Untied Healthcare which is now called Optum Insights.  They figures out how to use algorithmic formulas years ago and make things more complex and increase their profits.  Everyone else is following suit.  Don’t forget the former CEO of Ingenix is running Medicare now, so be afraid be very afraid of the one time Goldman Sachs Algo Man as that’s all he’s done, is use algorithms to increase profits and I assume he’s going to do the same to bring in more money for CMS.

It’s getting to the point that coding a doctor’s visit is like doing income taxes with every patient visit.  Sure there’s automated solutions but how much of a cut do the algorithms take to give a doctor that capability, quite a bit.  That’s how Health IT software works, build one layer, add another and another with new queries and bingo more money goes to IT and less for actual compensation of doctors taking care of patients.  HHS is just as bad with being mentored for years by United Healthcare with building their models and now they are kind of stuck a bit as the models are not working anymore.

That’s common and happens every day in the business world and CMS can’t quite figure it out it seems, but we have the six degrees of Bob Rubin running HHS and all we seem to get are a lot of selfies and templated boring stats that say the same thing over and over. It’s the worst and most lost leadership I’ve ever seen as the complexities are eating them up.  They make mistakes too in some of their perceptions, like this with medical records and “Information Blocking” which has kind of been the laughing stock of those in Health IT for a while now as we all know EMR vendors don’t have time to write code to do such a thing.  Now they are trying to save face for another incident of “Perception-Deception” that occurred or as I have called it for a few years, “The Sebelius Syndrome” in being Algo Duped and looking for Algo Fairies.

First thing doctors say when new rules come out from insurers or CMS, where are they cutting our pay?  Duh?  Each insurer also has their own coding rules, so here comes United, aka Optum 360 to make money off it it too with taking over revenue cycling.  They love it, the more complex it gets, the more billing algorithms they can build and decipher.  Anyone see the a system to this?  So look, hospitals getting hit with this change and others, well Optum 360 comes in with algorithms to work the algorithms…Optum 360 just loves seeing stuff like this happening as they get to bring their algorithms in and hospitals get to even pay more.  They just layer on their algorithms on top of McKesson.

Health insurance world is just about operating just like markets anymore, it’s all about the algos to make money, not about your healthcare.  Those doctors who are not in algorithmic compliance, well they get fired by another set of algorithms…so again who wants to be a doctor anymore?  The government and insurers are running them off faster than enough can graduate and enter the world of healthcare.  BD

Anthem Blue Cross recently notified physicians of additional upcoming changes to its reimbursement policies and claims editing software, ClaimsXten. The additional changes, scheduled to go into effect on September 14, 2015, come less than 90 days after Anthem’s most recent set of changes were implemented in July, and less than a month prior to the implementation of ICD-10.

Anthem states that the additional changes are necessary to bring its claims editing system in line with correct coding guidelines.

Anthem did not provide a detailed listing of all the incorporated changes; rather, it provided a reference sheet showing examples of the types of edits that will be incorporated as part of its September update. Concerned that the lack of detail could lead to confusion for physician practices on one policy change, the California Medical Association (CMA) asked Anthem for clarity on the Inpatient Evaluation and Management (E/M) services example. Specifically, the first example states, “Inpatient Evaluation and Management services (i.e., inpatient admission, observation services, and consultation services) should be billed only once by the same provider during an inpatient stay.” CMA asked Anthem to clarify whether the scope of the change is limited to the three services listed or whether it includes other inpatient E/M services.

Physicians can also access this information via the Blue Cross ProviderAccess website (log in, then select “Reimbursement Policies and McKesson ClaimsXten Rules” under the “What’s New” section).