Home » Insurance » Medically Related » Other Items of Interest » Technology » Health Net Gets Sold-Centene Managed Care Is the Buyer-Conglomerate of Companies Involved in Medicaid, Medicare and Other Care Managing Business Units

Health Net Gets Sold-Centene Managed Care Is the Buyer-Conglomerate of Companies Involved in Medicaid, Medicare and Other Care Managing Business Units

Centene is yet another managed care organization which you could say was a competitor of Health Net in some ways.  The big pull here is becoming one of the largest if not the largest company managing Medicaid.  Both boards have approved the merger/acquisition but as I understand share holders still need to turn in their vote.

such managed care contracts.  If you look at the image below you can get a better idea of the companies that belong to the conglomerate.  US Script is yet another pharmacy benefit manager.  You may want to read this link below and see what’s going on there as many but not all PBMs are diving out over their heads with “predictive” medication adherence which is different than normal medication compliance programs.

Optum is a big player in Medicaid contracts in California and this will be competition for them in this area.  Centene is assuming $500 million in debt with the deal.  In July 2009, UnitedHealth Group bought Health Net's northeastern licensed subsidiaries for $450 million and anyone in the northeast with a Health Net policy is under written by United as Health Net just managed some of it after the acquisition of the licenses.

Health Net sold its Medicare Prescription Drug Plan business to a subsidiary of CVS Caremark for approximately $160 million in cash in the year 2012.  Health Net still holds the Tri-Care northeast contract for military care.  Humana has the south and United has the west coast contract after they sued the DOD to get it.

As a little side note, Health Net got in trouble with the Ingenix data base as well and had to change their billing a while back.  The former CEO of Ingenix who everyone sued is now running Medicare…not a good thing.

This was an interesting acquisition and some of the news said United could counter offer but I seem to think not as the price is too high for them right now.  BD

NEW YORK – Centene Corp. agreed to buy Health Net for about $6.3 billion in cash and stock, creating a combination of two smaller U.S. health insurers ahead of an expected round of mergers among the industry’s giants. 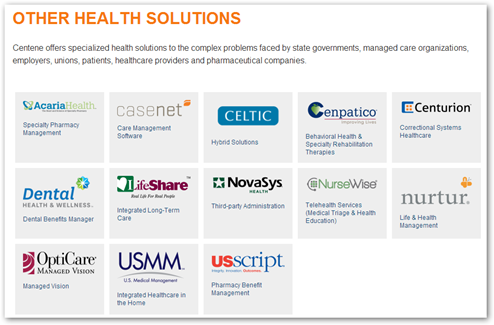 Health Net investors will get 0.622 shares of Centene and $28.25 in cash for each share they hold, the companies said in a statement on Thursday. The implied price of $78.57 a share is 21 percent more than Health Net’s closing stock price Wednesday.

The deal gives Centene the biggest market share among private administrators of Medicaid, the federally funded health program for the poor — a bet that the U.S. government will keep playing a larger role in health care. The transaction would give Centene a bigger presence in the California Medicaid program, which is the largest in the U.S. with more than 12 million individuals, and provides an entry into the Medicare market.