Did you read about 3 weeks ago that United Healthcare bowed out of this group after years of membership?  I think we have a large group of insurers that are in fact flat out tired of United Healthcare monopolizing HHS and CMS with healthcare.  It’s been going on for years and goes back to the the days of when Hillary hired Lois Quam from United and the open door got a little wider.  I’ve wondered in the past 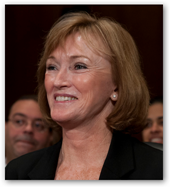 why the other insurers have not complained but how do they go up against such a massive conglomerate that’s into everything via hundreds of subsidiaries?

United has “stuff” going on, like wanting to be in the urgent care center business, taking over behavioral or mental health care where ever they can and more.

Again I have wondered through the years about how other insurers felt under the massive United impact and huge presence at the CAP, Center for American Progress think tank where you can find other folks like Jonathan Gruber and Zeke Emanuel.

We all know how somewhat mild mannered she is and Slavitt probably ran all over her when she was his boss, as how do you supervise an Algo Man who was a one time banker at Goldman Sachs?

I think the other insurers feel that having her name and representation in DC might help shrink the strong hold that United Healthcare and Optum have held over HHS and CMS for years and it’s still happening.  Read the link below from the Daily Kos…do you want a former Goldman Sachs banker Algo Man running Medicare…well that’s what Obama has nominated.  Cuomo of New York took him down a few years ago for his Algo Cheating on paying doctors short on out of network payments and there’s still a bunch of lingering lawsuits over what he did that have not completely settled, and he got a “hall pass” for those while running CMS as the “acting director” now.

He gets scarier every day as well with the White House Fake numbers that come out too.  BD

Are You Up For a One Time Goldman Sachs Banker to Run Medicare?