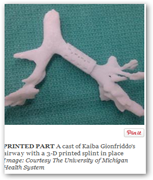 limited to mostly bone reconstruction areas and dental areas but now the tissue was actually re-created in the windpipe area.  It’s amazing where the technology is going and the doctors has to get FDA approval for the process as it had not yet been tried on humans, only animals.

At Wake Forest they are “printing” kidney’s as well using stem cells and this is all at the beginning stages and you can revisit this TED presentation whereby the kidney was being printed in real time back in 2011.  BD

Kaiba Gionfriddo was six weeks old when he suddenly stopped breathing and turned blue at a restaurant. Kaiba’s parents quickly rushed him to the hospital where they learned that his left bronchial tube had collapsed because of a previously undetected birth defect. During the next few weeks the life-threatening attacks recurred, increasing in number until they became everyday events. Physicians and researchers, however, used some of the most sophisticated bioengineering techniques available to 3-D print a synthetic tube to hold the baby's airway open. Kaiba had the surgery in January 2012 and hasn’t suffered an airway collapse since.

Problems with the trachea, however, lend themselves to 3-D printed solutions because the organ's ridged tubelike structure is simple. After testing their idea in piglets, Green and his colleagues were confident a printed device would work. Scott Hollister, a professor of biomedical engineering at Michigan was in charge of designing sleeve that would wrap around the outside of the floppy airway. The sleeve's structure allows it to expand as the airway grows and develops while simultaneously resisting spasms that pull inward, thereby collapsing the airway.

The team first used a computed tomography (CT) scan to sketch out Kaiba’s airways. From those images, they then sculpted a three-dimensional printed cast that had the same shape as Kaiba’s collapsed bronchus. Using that cast they created the sleeve or splint that would wrap around the bronchus. It took several tries but the researchers were eventually able to create a perfect fit. The next step was to sew the tissue of Kaiba’s bronchus to the inside of the sleeve. The team needed to obtain an emergency-use approval from the U.S. Food and Drug Administration before they could implant the device. "When we put the splint on, we saw his lungs move for the first time," Green says. As Kaiba grows, the device should expand with him.

Friday, May 24, 2013
Medically Related , Other Items of Interest , Technology