This is very nice, no more having the “hearing aide” visible and it is implemented behind the ear.  The clinical trial was conducted with 61 individuals, which by clinical trials numbers is small, but the results seem to speak for themselves.  You can visit the website and listen to several videos from people who have the implant and how it works for them.  There’s even Bill, a pharmaceutical sales representative who has one.  Bill says it was difficult to make sure he heard the orders properly so we don’t want areas of such to be missed when making your sales calls.

He talked about being able to go into the water now without having to worry about removing his hearing aide.  Bill the pharma rep said he thinks his hearing problems put him out of touch with being able to advance within his company.  He should be seeing higher sales now I guess:)

The battery is slated to run for 9 years so at some point in time there’s a visit back to the doctor for a battery change, or by that time perhaps a new type of advanced device may be available too, and I think that last statement is the reality of what we are seeing in device research and development today.  The device is for those who are impacted severely or moderately with hearing loss.  BD

The advanced implanted hearing system is the revealed to be the first completely implanted system which has grabbed an approval by the U. S. Food and Drug Administration for adults suffering from moderate-to-severe sensorineural hearing loss, a permanent lack of hearing. 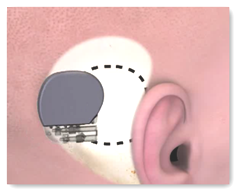 The system make use of sensors, processors, and drivers to convert vibrations in the eardrum and middle ear bones into electrical signals that are finally amplified and filtered to compensate for the losses in the sounds and speech signals.

The FDA approval is initiated based on a multicenter clinical trial involving 61 patients comparing Esteem to pre-implant hearing aids, revealing that nearly 56% of them scored better with the new device, with a net 93% scoring beating, in line with the initial scores on the test.