Home » Insurance » Medically Related » My Commentaries » Other Items of Interest » QSSI (United Healthcare Subsidiary) Calls It Quits With Healthcare.Gov-Stepping Down as Primary Contractor/Manager

This is interesting and it could be due to the 8 month extension given QSSI expiring and maybe HHS/CMS decided not to renew?  There could be other reasons as well.  Our current head of Medicare, Andy Slavitt was the former CEO of this United Subsidiary and moved from that slot to where he is now and was given a rare waiver to be He received a rare waiver to allow him to be involved in contracting issues involving Optum and the United Healthcare Group.

beginning back when Lois Quam, another former United Healthcare Executive was hired by Hillary Clinton with her first healthcare campaign.  Quam was also one of the key executives that escaped criminal prosecution back in 2007 when the Department of Justice investigated UHC for back dating stocks.  Many executives were found to have done it but the former CEO took the fall and Hemsley who admitted and gave his back dated stocks back right away continued to move forward and become the CEO of United Health Group today.

QSSI has been at the center of political controversy since the company won an HHS contract and then 2 weeks later were bought by United and Andy Slavitt, current head of Medicare came right along with the deal and a loop hole in current laws allowed him to pocket almost 5 million in tax free income.  You do kind of wonder why a millionaire several times over wants to run Medicare, right?  Before QSSI Mr. Slavitt also served as CEO of another United Healthcare company, Ingenix which also had a number of lawsuits based on false positives in anti fraud software as well as the algorithms that allowed doctors and patients to be short paid for 15 years on out of network claims.  The AMA settled that lawsuit with Ingenix and with other insurers who licensed it, such as Blue Cross and Health Net.  Aetna later would decided they could get out of the deal and built a case around lack of interest for not participating in the pay back they agreed to initially.

Before all of this though, Mr. Slavitt was a one time Goldman Sachs banker earlier in his career.

We might also remember the news of former HHS Secretary Sebelius running to register QSSI with the SEC and only to her dismay later she found out that United had not in essence violated any SEC laws with now disclosing the QSSI purchase as it appeared at the time it met the rules of non significance in the laws.

So as the progression moved on, QSSI with a large India foot print and domicile continued to be awarded contract for fixing Healthcare.Gov and other health insurance exchanges at the state levels.

So again we circle around back to this waiver that allows Mr. Slavitt, while head of Medicare to still be active in contracts negotiated for 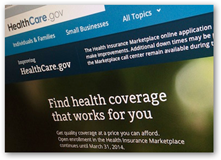 Optum and United Healthcare.  Frankly I’m surprised other insurers have not been a little upset over the long time advantage/relationship United has had over the years with HHS and CMS as former employees tell me they were always there to mentor and help HHS/CMS with their business models, and some of which are not doing so hot right now as no set of mathematics runs forever without updates or replacements, or ditching a model all together.

Long and short of it is just as what occurs in the financial business, all the actions take place with subsidiaries today and if you are not paying attention, companies like United grow via their subsidiaries and are in areas of business way beyond just insurance policies and managing care.  You can search this blog and find multiple blog posts to learn up on what else they do.  Back in 2013 I did a small summary to include some of their businesses to include owning and operating a custodial bank as well, and again subsidiaries do allow for the major corporation to stay outside the immediate radar.

So who’s going to be the head contractor now at Healthcare.Gov I guess is the question and are we going to also have “too big to fail” health insurers on the landscape just like the banks?  Here’s a new subsidiary of interest that just incorporated a couple months ago worth a read.  BD

QSSI, the politically-connected information technology firm that rescued the problem-plagued Healthcare.gov website unexpectedly announced Thursday that it is stepping down as prime manager.

The surprise departure of QSSI, the Columbia, Md.-based subsidiary of the IT health firm Optum and the health insurance giant United Healthcare Group, will raise new doubts about the future viability of President Obama’s signature program, Obamacare.

Three IT companies will have managed Healthcare.gov in its brief two-year history once QSSI is replaced.

A spokesman for the Centers for Medicare and Medicaid, which manages Obamacare, declined to comment on QSSI’s decision, including whether the firm’s departure was voluntary.

Thursday, May 14, 2015
Insurance , Medically Related , My Commentaries , Other Items of Interest