Than, the CEO of Zoeticx has created a new video to give us some updates on what’s going on at Zoeticx. 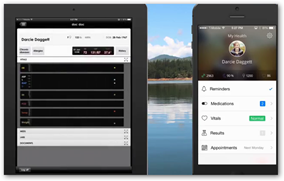 For the demonstration he’s using an Allscripts demo and if you visit the Allscripts store you can find Zoeticx as a “certified” application.  I might want to add here that Than has had exposure and experience on multi levels with his background both at Borland and at BEA Software, which produced the Aqua Logic server which was sold to Oracle a few years ago and is  now the famous Weblogic server that many use every day with Oracle.

the Zoeticx platform does confuse folks at time because it’s new and many have not seen engineering that allows medical records to interop “on the fly” if you will without the use of an HIE.  It does exist and Zoeticx is also flexible enough to be a Federated HIE platform that can also make use of an HIE as a data source so you get the best of both worlds.  When you stop and think about all the hacking that’s going on today, HIEs are just yet one more big target sitting out there for breaches, if you will, so “on the fly” interops gives you another solution with security.  When I mention “security” here, it’s like a phone call, live while the session is on going, and then dead (like a phone call hang up) when done.  I think this would appeal to many as we all know that the odds go down a bit when you don’t have a constant “live” connection.  Some HIEs use pointers as well and kill a constant connection too so there’s that side of it.  As a patient if you don’t understand how your medical records are shared, use the link below for a good explanation with videos on how this works.

How To Request All Medical Records That Have Been Exchanged With an HIE–Maybe Yes and Maybe No, But New Engineering for Medical Record Sharing Is On the Way For Better Privacy, Care and Actionable Use For Providers

Below is a recent video that gives some really good visuals on how some of the Care Connect features work.  Again keep in mind Than

is an engineer and thinks like one, so you may have to watch this a couple of times to pick up on everything.  I used to  be guilty of that myself when I did demos too:)  The real deal here is not having a “split screen” to view with the sources of data all under one interface on the IPAD, which is nice and I’m sure doctors will appreciate this by all means.

The Zoeticx platform sits on top of EHRs so the medical record programs are not going anywhere but the platform allows the use of the data in a much better actionable process.  This is what we want to provide good care.  In the second half of the video is where you see the “token” authentication that patients can use to give doctors permission to access their records.  In addition, I should also say this is not stored on the phone but rather on the Zoeticx server so no HIPAA issues there and it uses the “fingerprint” from the IPhone.

In addition, Than just informed me that they have now built an API for Athena Health medical records. 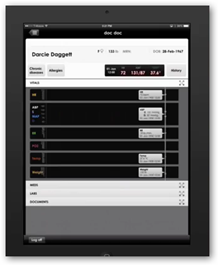 If you remember just a few weeks ago, Dr. Halamka gave their “home grown” medical records program to Athena for further development after being in house for years at Harvard, short quote below from the doctor’s blog.

“Over the next 5 years at BIDMC, we will select the best products and best services that meet the needs of our highly diverse network.   athenahealth products will be piloted in outpatient and inpatient locations.”

If you want a little more history on the development and details of the platform, here’s a prior post I made a short while back that focuses on “actionable” information and risk management.

This is actually pretty slick using the Apple one time token authentication as you may or may not have read, the token is good for access one time only so again that helps in keeping hackers out of the system.

Again the Zoeticx Interoperation platform is agnostic and can connect any medical records system with an API built gateway.  Currently they have an API built for Epic, Allscripts of course, a generic JSON (can be used with DOD/VA for example) and now Athena Health as mentioned above.  Again with all the data breaches and expense of HIE facilities which are yet another big hacker target, I think interoperating “on the fly” makes sense and sure there would need to be a network of Zoeticx servers installed, but you can do quite a few of them compared to the cost and upkeep of one HIE facility.  In California both Blue Cross and Blue Shield sunk around $100 million into a state wide HIE, and right now with the Anthem breach, we have the Consumer Watchdog advising patients “wait a minute” and let’s ask for some additional security questions.  Even before the breach I had my reservations as well.

Insurers seem to be driving themselves off the cliff these days with too much “non relevant” data when it comes to paying claims it seems, like buying up all our credit card transactions for one.  Claim data is good and tells a lot but it’s not as good as clinical data and you always have this 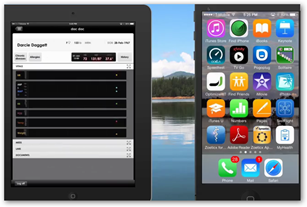 debate it seems with doctors and insurers.  Claim data can be changed in context at times just to get it paid and you miss the real clinical details.

I know we all have standards and HL7 and the new up and coming FHIR are important as the EMRs need this; however when you use a platform like Zoeticx to interop, being the EMRs have the standards built in, the platform can bring all the data together.  There’s a lot of debates going on out there on Health IT for sure and some outside the industry don’t understand the complexities that make healthcare different for sure.  When you talk about the importance of accuracy, medical records standards are at the top as “it’s all about us”.  There are the CCR and other formats that produce basically a continuity of care record which pretty much has been used for giving to patients and in some instances to export and import basic patient medical record information.  This is where there has been some snags with the mappings with some vendors and it’s not an easy job by all means.

Again using a platform like Zoeticx can get rid of some of this rhetoric with interoperating.  I keep reading about “punishing” the EMRs that don’t interoperate and I just can’t get my head around that political agenda at all and think it’s kind of stupid in the long run.  Now if you have platforms, be it Zoeticx or another one to where the EMR vendors refuse to create a gateway, now you have “real” folks resisting and not the fairly tale version we seem to keep hearing circulating around Washington DC.  Every time I read something on that topic I just start thinking about how Congress really needs to fund and use that Office of Technology Assessment so we don’t get the tech BS in there making a mess of things too, you  think?

Big Clinical Data Registries Next? Why Doesn’t Congress restore the Office of Technology Assessment? More Proof that It’s Needed As This Is Yet One More Complex IT Project That Will Not Contribute Good Care, Just An IT Expenditure With a Lot of Quantitated Justifications Tossed In

In addition in the archives here at the Quack, Zoeticx had created their own unofficial challenge to the ONC on their interop timeline. 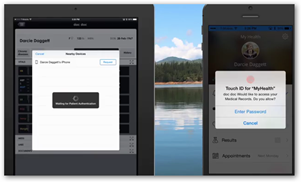 As I understand it, the ONC has had a fairly recent demonstration of the Zoeticx platform and I think it was positive overall too.

So again as hackers are driving a lot of decisions today, perhaps the interops of medical records “on the fly” might have a real place soon as at some point how many more HIEs can we build and afford?  Sure there will always be some but it’s getting expensive and they are great targets for hackers so maybe it’s time to shift our thinking a little bit on how the future of interoperating medical records is going to take place?  I’m sure I’m not the only one pondering this question as well and I still do see the Zoeticx platform as a valuable answer, again going JSON to JSON, which works with HL7 and FHIR to interop medical records and most importantly give the doctors the data they need to provide good care without a lot of hassle.

It’s a win-win for patients too as this type of interoperation also assures them that their records never leave their “home domicile” either whether it’s the doctor’s office or the hospital, they all go home after the interop session.  For doctors that would seem to be an easy explanation on record sharing it seems to me.  They never leave home and just take a short vacations with a lot of privacy:) BD