“Catamaran offers a true alternative to the status quo in pharmacy benefit management. You don’t have to choose between the scale and purchasing power of the largest providers and the flexibility and agility of smaller ones. We offer the best of both. At Catamaran we put your individual needs — and those of your members — at the center of our services. We connect pharmacists, doctors and caregivers with prescription data to improve health outcomes, offering the clinical intelligence, technology and scale to lower payer costs while improving member health. Only Catamaran brings together the industry’s best technology with the industry’s most renowned client service model to offer true innovation, real flexibility and powerful results. Stay well ahead of costs. Stay well ahead of health issues. Stay well ahead with Catamaran.”

About the Catamaran lawsuit, you can read more here on how that goes.  The matter of low balling somehow reminds me of the AMA lawsuit where Ingenix, the former subsidiary of United Healthcare had to settle their class action suit of lowballing doctor payments for 15 years.  That occurred just a few years ago.

“In court documents, the pharmacies claim Catamaran inflates the patient’s cost for prescription drugs through overcharging insurance plans while underpaying the pharmacies that dispense the drugs.  Catamaran’s practice of not disclosing new pricing until a claim adjudicates constitutes bad faith and unfair dealing, the claim says, because it denies pharmacies the opportunity to plan for changes in reimbursement and will inevitably cause financial harm to those pharmacies.”

Of late the company has been putting out press releases about giving away Easter baskets and having an all day city baby shower?  I think that’s all distraction from the business of healthcare that Untied runs.  They make more money selling data than most out there.  Here’s something of contrast worth a look at Johns Hopkins “wants” to be in their network for folks why buy insurance from the exchanges and United fired them.

Also worth noting is this huge big conglomerate also tries it’s best to “dupe” young developers into writing code for them for free too, they always have a way to get something for almost nothing over there and sell the heck out of your data to make billions in profits.  When you read this “write for the Longevity network pimp article, you know exactly they want apps to mine more data to sell.  That’s 1/3 of the United

business today and 2/3rd of what they do is insurance.

Every time you fill a prescription, the amount of “data for sale” that comes out from that transaction is amazing and mounts up to a ton of profits, meanwhile you and I aren’t getting any healthier overall and sure there’s some basic analytics that offer insights which is good, but Untied is way beyond that.  I was told for years that Medicare/CMS depended on they heavily to help them create their business models by some former employees.  It makes sense to me a they have truckloads of subsidiary companies that operate where you don’t even see it.  About a year ago I had a hospital CEO fall off his chair when he realized how many Untied subsidiaries they were writing check to.  Anyway, see the link below as here’s how this “buy and conquer” data selling thing works…and people lose jobs too.  Heck who knows maybe they’ll be buying this outfit next:)

Keep in mind that insurers have hired armies of quants now that design policies as this way they get both the long and the short projections too, the long from the actuaries and the short value from the quants so they can correlate those numbers with stock prices.  That can really be of value right now with the record numbers of stock buy backs taking place.

So all in in, you’re just another script in the wall…and of course the pharmacy benefit mangers run a lot of United/Optum software to score you for medication adherence and other items about you they can sell for profit.  Optum and Milleman have had software doing analytics hooked up to pharmacy benefit management companies for years selling all kinds of prescription data that is not protected by HIPAA as this is not a protected entity in case you thought it was with privacy.  See look at this, even if they don’t own the pharmacy benefit manager, they sell them software so United wins and gets money everyway around the hook anymore.  By the way, the company mentioned in the link below, Ingenix is now called Optum and their former 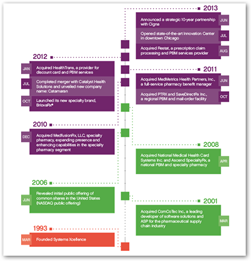 If you go back in time there were tons of Ingenix lawsuits against Ingenix and their false positives on fraud that put a lot of doctors out of business and then too we had the AMA settlement.  The AMA class action settlement was for short paying doctors for 15 years on out of network payments, and again that was all during the time when current Medicare Chief Andy Slavitt was CEO of Ingenix.  HHS blessed him every which way but loose when they hired him as they had to stop the conflict of interests as he would not be able to do his job with everyone after his former efforts at his prior employer, United.  By the way, Mr. Slavitt started his career as a Goldman Sachs banker.

Last but not least, don’t forget that Pharmacy Benefit Managers are in the business to sell drugs so again United has more money coming in from that direction and there’s hungry IMS who wants to buy up and sell all kinds of prescription data out there as well.  So there’s more money that goes into the United profit pot, and oh by the way, IMS had an IPO last year, that $180 billion dollar a year data selling business hurting consumers is growing like a weed.  Look at the image at the left, just a bunch of software acquisitions and merging of such…same old same old in that respect.  BD

The largest US health insurer is to spend almost $13bn to buy a company that manages prescription medicines for 35m patients, the biggest in a series of healthcare deals announced on Monday as consolidation in the industry continues at a blistering pace.

UnitedHealth said it would acquire Catamaran Rx, the fourth-biggest US pharmacy-benefits manager, for $61.50 per share in cash and combine it with OptumRx, its own pharmacy business. The $12.8bn offer represents a 27 per cent premium to Catamaran’s closing price on Friday.