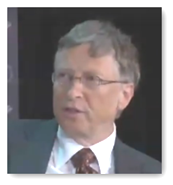 eradicating polio and other vaccine efforts.  Somebody cancelled a meeting with Gates to see Obama and there’s a little laugh.  Nobody says who it was.  This was recorded at POLITICO’s Playbook Cocktails first annual event.  He talks about models being needed.  He says government is dysfunctional where people don’t know what their budgets are.  “We might have money or we might not” is what he says is part of where the problems lie and he’s referencing the sequester.

He does talk about cyber crime and how it needs to stop and needs focus.  He varies off on other topics and keeps coming back to healthcare, science and engineering.  He thinks Obama has done a good job on education and is unappreciated in those efforts.  He says some days he wished we had a system like the UK but says the US system seems to work better and wishes the President had a little more power to avoid so many of the deadlocks.  Bloomberg says Bill Gates reads everything.  BD

Gates has waded into everything from AIDS research funding to infant mortality. He and his wife have interacted with some of the world’s most influential leaders through their charitable work with the Bill & Melinda Gates Foundation.

Gates pointed to Twitter as “the best thing right now” for big audiences, assured the demise of print textbooks and even weighed in on the gay Boy Scout ban. Should the rules change? “Yes,” he said without hesitation. “It’s 2013.”