This took place at a senior home in Bakersfield.  Listen to the 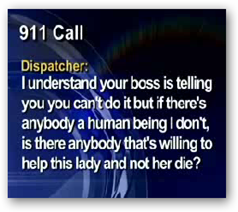 911 call and the nurse talking, “it’s against our policy” she says.  911 operator pleads for here to give CPR.  Listen to the doctor and his opinion and says it’s disgusting.  I guess we have given up being “human” to not violating policy.  Regardless of policies there’s state and federal obligations to follow.  They could be looking at losing their license.  She died at the hospital and the doctor stated “what should she have done? Something”.  The woman’s family did say she had lived there for 3 years and was not in good health but that’s most are there.  Again the ethics here are certainly poor and this reflect back on why I hate to see such ugly stuff in the press about folks that are obese or sedentary as will this “media conditioning” lead to occurrences like this?  Something to think about …as she wouldn’t even consider asking someone else to try.  BD

BAKERSFIELD, Calif. (AP) — An elderly woman being cared for at a Bakersfield retirement facility died after a nurse at the facility refused to perform CPR on the woman after she collapsed, authorities said.

When the 87-year-old resident of Glenwood Gardens collapsed at the facility around 11 a.m. Tuesday, a staff member called 911 but refused to give the woman CPR, Bakersfield television station ABC23 (http://bit.ly/YQULm3 ) reported Friday.

An ambulance arrived several minutes after the call and took the woman to a hospital, where she was later pronounced dead. She has been identified as Lorraine Bayless, a resident of the home's independent facility, which is separate from the skilled and assisted nursing facility.

Sunday, March 03, 2013
Medically Related , My Commentaries , Other Items of Interest