Data, data and more data.  I’m sure there’s been a ton of work here with using the existing AHLTA system from the DOD and working with the VA VistA system as there have been several progress reports and trials as

well as VistA working with other commercial medical record systems.  Now, scrapping ALTHA and getting another system before integrating or aggregating with the VA yet adds more to the challenge. If ALTHA was that bad, why were they not discussing canning it sooner one might ask?  I think that’s a good question.  Now we come back to the original question about moving medical records from AHLTA into the VistA system, that is if the DOD will “choose” VistA as their medical records system.  Both systems are written in MUMPS as the back end which is a big plus without having to do data base work conversions with tables, etc.  Some of the front end is done in dot net, just as some of the commercial versions of VistA have been converted.

I last reported that the two agencies were going to create a split dashboard with each system on a screen where both systems could be seen and utilized.  Granted the AHLTA system is going to have some battle ground record keeping that VistA may not have currently too, but why in the world does the DOD want to look at yet buying another potential commercial system at this point in time?  I know it’s a ton of work and engineering to move medical records from one massive system to another, such as we have here and it will take time and thus the “dual screen” option was created instead of actually moving records.  You can see some of the testing at the link below that was done to test an overall user interface with both systems a year or so back.

So again now the DOD is questioning whether or not the VistA medical records system from the VA is the best choice for them.  From a data standpoint it certainly makes sense rather than bring additional software into the situation and with war time and battle ground record keeping that may not be relative to the VistA program, run a platform on top of VistA if it is needed for some veterans and at least that way all would have their basic medical records in one system.  This is expensive to engineer all of this and takes time 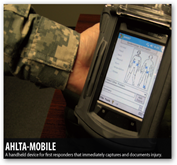 so again adding yet another commercial program to replace AHLTA is a huge cost.  VistA is certified as a modular EHR too, even though there are no stimulus incentives, the agency wanted to show that the system works as well as commercial systems that also get certified.  The MyHealthVet PHR is also a certified module.  I even tried to give them a little room on this post explaining the software program for claims and how long it took to evaluate what to do with the two medical record systems.  The sad state of affairs though with claims is getting the software to handle much of the job sadly and that does nothing for those who are waiting and the only real way to speed it up is to hire some humans temporarily until the software is up and running in more facilities it seems.

Also too if the DOD wanted to look at other systems they might want to look at commercialized versions of VistA that are sold such as Medsphere for one and there are a couple others out there.  Good old Jon Stewart sums it up pretty good with his video.  It starts out talking about the VA and graduates into the medical records systems.

So it appears now with the VA suggesting the DOD use VistA we have come full circle back to moving medical records from one system to another with a full migration if DOD decides that is what they want to do with now scrapping the AHLTA system.  I do understand some of the soul searching here as the VA VistA system was also busy with connecting to other system as well in the meantime and there’s many ways to go here.  The slide show below gives you an idea of what AHLTA look like and references some new modifications that were made last year.

It would make sense to have VistA as the main system for sure at this point versus bringing in more expense with other commercial record system, so if that ends up being the case, bring in the data technicians and coders and let’s get the show on the road.  BD

Ever since the Defense Department and the Veterans Affairs Department decided to step back from their approach to building a joint electronic health record earlier this year, DoD has been searching for a new electronic records system. As DoD nears a decision point, VA is making the case that its own system, VistA, would make a great fit for both departments.

The two departments' original vision was to build a single electronic health record that would follow a service member from the time he or she enlisted in the military to the time they exited VA care. Both agencies say that's still the fundamental goal, but under a revised program they announced last month, rather than building a record system from scratch, they'll each begin from separate "core technology" starting points and focus more on sharing data than integrating their systems.