This is really kind of sad to see the same toll we face over here with problems with money and banks hitting the NHS too.  One industry destroying another one pretty much and all suffer.  London has become it’s own island of 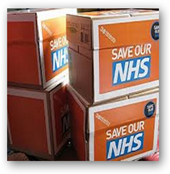 sorts to where portions are where only the rich and wealthy go and the rest, well I guess is where their 99% live.  The English are not taking this lightly and are protesting as well, and why wouldn’t they.  Many jobs will be lost and rational of care will be more widespread.  The country is counting on the “haves” to buy insurance to leave what is left of the outsourced services to the poor and the article states it will be a 3rd class service.  You can read in the comments below they are not too hot on United Healthcare and their efforts in the UK as a private provider.  They say also that due to contracts being given out that the care is not improving either and nobody knows how many hospitals will be closed.

They expect private providers to cherry pick patients and leave the worst to the care of the NHS, sound familiar, just what we have in the US when they can get away with it.  Israel said a few years ago that their big mistake was letting private insurers into the country and apologized to their citizens, so hopefully they don’t end up with the same mess we have here in the US as it is cold, calculating business with many working on flawed formulas and data just to make money anymore.  This is not the people who work there but rather those who run such companies.  BD

The act comes into effect on Monday. Very few people understand its implications but it will affect each of us arguably more than any other legislation passed in our lifetimes.  It is the final stage in the systematic dismantling of the NHS – a process that began about 25 years ago – carried out by stealth.

The Health and Social Care Act 2012 is virtually impenetrable but the main thrust of it is: primary care trusts and strategic health authorities will be disbanded. In their place, clinical commissioning groups – also known as GP consortia – will control about £60bn of the NHS budget and commission local services. Commissioning will take place through competitive tendering. NHS contracts will be opened to the voluntary and private sectors. Already, £250m of NHS services have been forced open, with 105 private firms granted contracts. This year, a further £750m of services will be tendered. The NHS annual budget is more than £100bn – there are huge profits to be made for private healthcare companies.

The NHS, as we know it, will effectively be abolished just short of its 65th birthday.  The marketisation of the NHS has driven up costs and produced worse results. The track records of some private providers now entering the NHS, such as UnitedHealth Group, are not impressive.

We now know that more than 20 NHS trusts, comprising about 60 hospitals, are at risk of going bust. This is, in large part, due to the financing of extortionate PFI debts projected to rise above £79bn despite the original cost of the hospitals being around £11bn. The rapid restructuring of South London Healthcare Trust, with the downgrading of neighbouring, solvent Lewisham hospital, is a template that can be used across the country. No hospital is safe from closure.