Home » Insurance » Medically Related » My Commentaries » California and Vermont Force Insurers to Bid for Healthcare Representation With Insurance Exchanges, How Many Will Bid and Where?

California and Vermont Force Insurers to Bid for Healthcare Representation With Insurance Exchanges, How Many Will Bid and Where?

The reason for this question has already been stated by United Healthcare with a news article that came out a short while ago, they will pick and choose, so will the pick and choose in California and Vermont?  Time will tell when we see the results I suppose.  Before any of this is determined we all have to remember they will all consult their business models and determine where profitability lies as that’s how business works today and United in particular has tons of ads looking for more Quants all over the country all the time.

The CEO states they 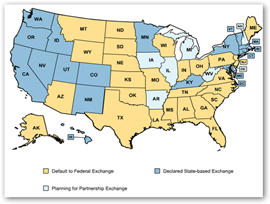 will participate only in exchanges that are “fair” and the company far outreaches every other insurer out there with the use of analytics and has for years.  You can go back to the AMA lawsuit to where United short paid hospitals and doctors for 15 years and the company has tons of subsidiaries that contribute to their bottom line so I assume they will crank their business intelligence analytics to see where they want to go as the company is making almost more money “managing care” today versus selling premiums, although you do need premiums paid for insurance to start the managing care ball rolling.

Also we have companies like Wal-Mart that have expressed an interest with being a Health insurance exchange…is this an outsourced possibility?  Just a question out there to ponder for consumer availability and access.

Of course we all wonder if the states will all be ready for the deadlines or will that maybe be extended as IT infrastructure needs to be in place for any action to take place.  The world is finally coming to this realization that with complexities today and with data and some of the unknowns you can’t just place targets dates and expect them to be met all the time and we see this along with subsequent comments from many who have not come to grips with this well documented fact yet.  All one has to do is read the news. Is the bargaining power on the side of the insurers or on the side of the exchanges..another big question to think about as insurers could be quite picky about where they want to be in place.  BD

The 2010 Affordable Care Act gives states the power to impose a bidding system for insurers to join the exchanges as an option to help drive down costs. A survey of the 16 states that will run their own systems starting in October found that 12 won’t require such a system and at least one other is undecided.

“It’s a missed opportunity if the exchanges don’t use their bargaining power to force insurance companies to compete on price,” said Jay Angoff, a partner at Mehri & Skalet in Washington who once served as Missouri’s insurance commissioner and later worked for President Barack Obama’s administration.