Home » Insurance » My Commentaries » Technology » Nancy DeParle Returns to What She Knows, Private Equity-Technology Experience, Knowledge And Being In Touch With Reality Is What Government Needs Today

This was kind of a funny interview here and during the initial transition of the White House things were different years back and there were quite a few “transition” type people hired.  If you look at the US CTO and CIO jobs, both of the transition folks got out of Dodge too as the job requirements changed to be heavy on technology.  Back in 2009 I questioned both Sebelius and DeParle and wondered how long they would stay around.  DeParle left her job a while back and Sebelius is still there. 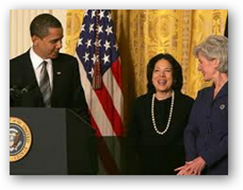 What is happening here is that it comes out in the press with things that are not relative.  A few weeks ago I read where DeParle stated the “IT work was done” as it relates to insurance exchanges and there’s nothing further from the truth as you can read about it every day, again we come back to digital literacy and political comments made to sway opinions that are not accurate.  Here’s a recent past that talks about some of the technologies for the exchanges…

Once you read articles like this with the technologists who are actually doing the work with first hand technology experience, it becomes more transparent that the comments made by politicians are kind of useless as they give somewhat of a digital illiterate translation.  Here’s another one where Sebelius wants to “speed up Health IT”, well we would all like that of course but we are still humans writing code and these are embarrassing moments.

So again we come back to many folks that were in fact “transitional” and when the real work is needed, just as you see with the current US CTO and CIO jobs, the folks with the technology talent are tasked to do the job.  In this interview, she says she’s having fun with Private Equity, so how many others are having “fun” while Algo Duping for profit continues to grow along with the data selling epidemic.  I guess it’s nice that folks with some money at the top can have “fun” while the rest of us are at the mercy of the code and algorithms running on servers 24/7 making like impacting decisions about all of us along with this huge problem of the data selling epidemic that few have recognized that is cutting away at the focus of the economy.   She couldn’t talk about this issue or even acknowledge it I don’t believe as she references he own kids being addicted to apps?  What’s up with that?

The rest of us out here are not having fun, ask any doctor, hospital, etc.  She just doesn’t get it and is now so removed in her focus that the least involvement she has right now I think is better as it is time for some real truths to be brought forward with Health IT, which is what I try to do here.  From the way this article reads, she’s all about money and again back in the early days with organizing she had some input and value but it’s certainly not what we need today for consumers, patients and providers.  It’s dangerous sometimes to have “transitional” executives hang around too long in my opinion.  BD

The former director of the White House Office of Health Reform, since 2011 DeParle had been deputy chief of staff for policy, helping the president develop policy in multiple areas. Still, DeParle is best known as a chief architect of the Affordable Care Act, and a former administrator of the Centers for Medicare & Medicaid Services (CMS) during the Clinton administration.

Earlier this month, DeParle returned to a healthcare focus, albeit in the world of private equity, as a partner with the New York-based firm Consonance Capital Partners. She'll help guide CCP's investment decisions in lower middle market healthcare enterprises.

I am increasingly using them, and from watching my own teenage children I can tell you that they’re hooked on them. Whether it will apply to the population at large is still something of a question. In the last few weeks, I’ve been speaking with CEOs at insurance companies, and they are all over this trend. They see mobile apps and tools as a way to help manage patient engagement. They are trying to go where people are living these days, which is on their smartphones, their tablets, and giving them something that can help them manage their health.