Home » Medically Related » Other Items of Interest » Man With 132 Pound Scrotum Finally Has Surgery and Gets Relief..Could Not Afford the Cost And Had to Find A Way…

Man With 132 Pound Scrotum Finally Has Surgery and Gets Relief..Could Not Afford the Cost And Had to Find A Way…

You have to watch the videos and it was almost overnight that his scrotum grew to the size of a melon, and each month afterwards it added on another 3 pounds until it got to the point where it was before surgery. 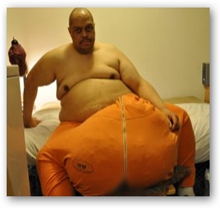 He was finally able to have the surgery to remove it.  This was a rare condition and again watch the video and see how hard it was for him to get around with this between his legs.  It did nothing for his sex life and he hopes that perhaps maybe with some additional surgical procedures it might come back.

As you can read below, his story will be on the TLC network and perhaps this was where some of the money needed came from so he could have his surgery?  The doctor donated his services if Medicaid would cover the surgery but there’s always something else that comes up with cost.  The condition started 5 years ago and he said if affordable care was more available, then he would not have had to suffer and could have had his surgery sooner before it got this big and painful.  He could no longer wear pants and wore a “hoodie” upside down.

Here’s another video with an interview after he had his surgery.  BD

(CNN) — Imagine carrying a bowling ball between your legs that weighs close to 200 pounds. If that image is too much to stomach, continue reading with caution.

Wesley Warren, 49, spent more than four years with this extra burden before having surgery to repair the damage from a rare medical condition called scrotal lymphedema.

When doctors placed the swollen mass they had cut from Warren’s scrotum on the scale, it weighed 132 pounds. That’s not counting the fluid or smaller pieces of tissue the surgeons had also removed from the Las Vegas man.

“There are a lot of people that will look and laugh and stare in shock and awe and amazement,” Warren says as he walks down the street in a preview for TLC’s upcoming show “The Man with the 132-Pound Scrotum.” The one-hour special airs Monday at 9 p.m. ET/PT.
“It’s tough to deal with it, you know, because essentially, this is a sort of living and breathing freak show.”