Buying Vanguard was a big expenditure and they bought a big chunk of debt as well.  This is what accounts for the 4th quarter loss.  During the first quarter in 2013 Tenet lost $88 million, so they have been up and down. 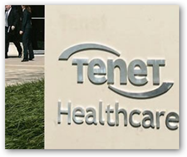 Now we have the suit filed here, the result of a whistle blower for referral payments.  Admissions were down the 4th quarter as well they were pretty much across the US.

In addition we have the CommonWell news that the hospital system will use their system to exchange records and will work with CommonWell on the next phase of “patient matching”…that one requires some real ass kicking algorithms so the group will be working on that for a few years.  The document query and retrieval services will show up long before the matching I believe.  A couple years ago Community Hospital System was trying to take over Tenet.  Tenet also has a couple of technology subsidiary companies.

In addition Tenet signed a new 2 year agreement with Aetna which also covers those with Coventry, which is also owned by Aetna.  The original lawsuit was filed in 2009 and Claims Florida Health management Associates entered into contracts that referred pregnant women in the US to hospitals operated by HMA and Tenet for kickbacks from Medicaid claims that were fraudulent in nature.  Four Tenet hospitals are involved along with one HMA hospital.  HMA recently by the way had to send money back to CMS as 11 of their hospitals did not meet Meaningful Use criteria.  A lot of Tenet news all at once.  BD

The disclosure this week comes as Tenet has tried to reshape its image and operations since 2006, when it reached a $900 million settlement, one of the largest ever, with the U.S. Justice Department to resolve fraud accusations.

The new investigation alleges that four Tenet hospitals in Georgia and South Carolina made improper payments in return for patient referrals. Both investigations also were triggered by whistle-blower lawsuits filed under the U.S. False Claims Act, leading federal authorities to intervene as plaintiffs.

The FBI said in its release that the hospitals paid kickbacks to obstetric clinics serving “undocumented Hispanic women.’’ The money was in exchange for providing labor and delivery services to the patients. The hospitals then falsely billed Medicaid for reimbursements tied to the procedures, the statement said.