Home » Medically Related » My Commentaries » Other Items of Interest » Technology » What Can Healthcare Learn From Aviation? Watch Your Models As The Virtual World Can Be Far Different From the Real World When It Comes to Designing And Implementing Software & Hardware

What Can Healthcare Learn From Aviation? Watch Your Models As The Virtual World Can Be Far Different From the Real World When It Comes to Designing And Implementing Software & Hardware

No this is not another what can doctors learn from pilots again…that has been hashed enough and the topic seems to come around when other news is slow.  Remember a while back the story about the 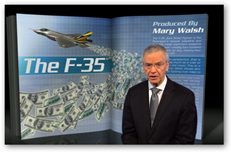 pilot that convinced the AMA for years that he was a doctor?  Here’s the link below if you don’t remember so the AMA didn’t really learn anything from aviation in that respect. (grin).

Pilot At United Airlines Claimed to be an MD and Duped Many, Including the AMA With Phony MD Credentials

Getting back on track did you see the 60 minute segment on the F-35?  If not you can watch below.  It is late and way over budget..hmmm..same could be said for a lot of health IT infrastructure programs..remember Healthcare.Gov and it’s still not done.  Just like Healthcare.Gov we are not going to throw out the F-35 either.  As a matter of fact the Air Force reluctantly upgraded the A-10 software after Congress complained too.  Here’s a little clip from that article..kind of reminds you of medical software, right?

“Ayotte pointed out that the Air Force had issued orders to cease development of a package of software updates for the A-10 called Suite 8.

The Suite 8 software package includes a new transponder system known as Identification Friend or Foe Mode 5. For an A-10 pilot, this technology is crucial, as it allows other friendly aircraft and ground units to identify your aircraft as friendly.

“They are still cutting the budget so I have to do something, and, unfortunately, the something that is left is worse than cutting the A-10 fleet,” Hostage told Defense News. “It is far worse for the nation if I have to keep the A-10 and cut a bunch of other stuff because they will not give me enough money to keep it all.”

The video shows how the “tires” which were modeled don’t work and the design was all done via simulation.  This just goes to show that while models are important and get us through the designing states a lot faster, they are not without errors.  This is what bugs me is to see Congress running around with “no models” either, just a budget and you need both.  Again a model is not 100% and needs to be adjusted and corrected at times but you can see from the video, the tired were modeled early one and they don’t work.

So what does this have to do with healthcare..a lot the same issues.  When it comes to patient care sometimes the software gets in the way, now this doesn’t mean it’s not supposed to be there as we need it but the model is broken when it comes to help making doctors efficient.  Failure?  Yes we have scribes..so the model got too complicated.  I get so frustrated with what I have coined “The Sebelius Syndrome” to where she and others just don’t get it at all and look for algorithms fairies.  She just frustrates me no end anyway with so many non truthful statements in public that are just due to perceptions and digital illiteracy.  Thank goodness she’s not in charge of the F-35 or she would be sending jets up to fly and crash with software that is not complete (grin).

So both the F-35 and Healthcare.Gov overspending budgets…oh well…here’s a company that Kaiser developed and sold…all they is model..clinical trials is one of their models…so again how they work in the real world might be a lot different than the mode.

off and the real world kicks in and when it comes to healthcare, that is important.  As a matter of fact if you have not read the essay “On Being A Skeptic” use the link below and there’s some very good points made here.  You can’t trust the models 100%.  You see this in studies all the time reported in the news…and people seem to think that what ever a model creates is accurate…well this wrong…again think of tires on the F-35.  There’s a model gone wrong and think of it in terms of treatments in healthcare…as patients we don’t want bad tires.

The moral of this story here is to be a skeptic when you need to be, don’t suck in every study and report you see, the model may be wrong so ask questions when you feel it is appropriate.  If all the medical record models were correct we wouldn’t need scribes would we?  Keep that though and furthermore how much more difficult life is with models that don’t work, lack ethics or ones that just simply lie for profit.  We see insurers model like crazy and they are hiring more modelers by the grove.  We don’t want to end up with a lot of quantitated justifications for things that are not true.  The F-35 was one huge erroneous model for the military and new models are now being built and used and they cost money when change them too far down the road.  BD

These planes coming off the Lockheed Martin assembly line in Fort Worth cost $115 million a piece, a price tag Bogdan has to drastically reduce if the Pentagon can ever afford to buy the 2,400 planes it wants.

Chris Bogdan: I know where every single airplane in the production line is on any given day. You know why that’s important? Because Lockheed Martin doesn’t get paid their profit unless each and every airplane meets each station on time with the right quality.

David Martin: So if this plane doesn’t get from that station to this station.

Chris Bogdan: On time with the right quality they’re going to lose some of their fee. You’ve got to perform to make your profit.

David Martin: They must love you at Lockheed Martin.

Chris Bogdan: I try and be fair, David and if they want what I call “winner’s profit,” they have to act like and perform like winners, and that’s fair.