State Senator Calderon sounds like he was really working it for the money.  Lumber Fusion surgeries got a kick back of $15,000.00 and the list went on and on for different procedures.  The state senator set up meetings and more to work on laws that would allow his efforts to continue.

Pacific Hospital was where all the action took place in Long Beach.  The former hospital CEO was doing bad as he lives in the OC in Corona Del Mar, just south of Newport Beach.  Remember Dr.  Justice the Orange 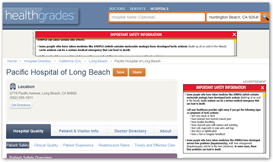 County oncologist caught for fraud, well used to live down in the same area.

The hospital has been closed and the building has been sold, but guess what, Health Grades says it’s still there (grin) and they have average ratings…gosh don’t rely on those sites as they are full of errors as well as Vitals and a few other sites, they are just there to expose you to ads as even hospitals that are closed are “click bait” out there today.

So far none of the patients have had any reported problems with the surgeries they had done at the facility.  The senator’s brother has also been arrested by the FBI as a participant.  Now is the state senator going to resign?  BD

LOS ANGELES (AP) - The former owner of a tiny orthopedic hospital with an unusually heavy roster of spinal surgery patients was charged Friday with health care fraud in a $500 million scheme to defraud workers' compensation insurance providers with the help of a California state senator.

The state insurance commissioner called the 16-year scheme one of the largest workers' comp fraud cases in the history of California's Department of Insurance.

Michael D. Drobot, 69, a central figure in the scandal that ensnared state Sen. Ronald S. Calderon and his brother, agreed to plead guilty and testify in return for a reduced sentence. Calderon is charged with accepting bribes and luxury perks from Drobot to influence legislation that would allow him to continue the scam.

"In some cases the patients lived dozens or hundreds of miles from Pacific Hospital, and closer to other qualified medical facilities," the court documents said. The patients were not told that their medical professionals were getting kickbacks for sending them to Drobot's facility.

Drobot had a bribery payment scale for specific surgeries, the documents said. He would pay a kickback of $15,000 per lumbar fusion surgery and $10,000 per cervical fusion surgery.

With Calderon's help, Drobot said he was able to meet with other senators to discuss his legislative agenda and advocate for bills that would financially benefit him and his hospital. No other senators were named in the indictment.

Many of Drobot's revelations centered on his extraordinary largesse when dealing with Calderon. In addition to money, there were jobs given to Calderon's children, expensive dinners, trips to golf resorts and free flights on a private plane, the indictment said.