This has not been approved by the FDA, but it is in clinical trials.  This is a pretty amazing device. 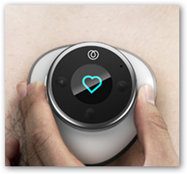 CADence is the name of the device.  For the trials what they are looking for are patients that already have issues to use the device to check for accuracy.

The device hums and works from sound waves and is able to identify blockages in the coronary arteries and there’s no radiation, and of course we like that.  The device is to be used in an office setting and compared to the tests we do today who wouldn’t prefer this test and device.  BD

Sounds associated with turbulent blood flow through partially blocked or restricted arteries are used in several common clinical practices. The first is the measurement of blood pressure where the brachial artery in the arm is restricted by a pressure cuff; the sounds generated are called Korotoff sounds and are used to determine the onset and cessation of blood flow and the related systolic and diastolic pressure. Blockages in the carotid arteries in the neck can be detected by the sounds they produce. Similarly, coronary arteries produce a sound associated with blockage.

The first time sound was described in conjunction with coronary artery disease was in a 1967 American Journal of Medicine article written by Dock W, and Zoneraich S. They detailed a high frequency diastolic/continuous murmur that was found along the left parasternal area at the 2nd, 3rd, or 4th intercostal spaces. This sound was correlated with moderate to severe proximal left anterior descending coronary artery stenosis. It was named “Dock’s Murmur.”