Home » Insurance » Medically Related » My Commentaries » Richard Simmons Video Produced by Covered California Prompts State Senator To Call For An Audit Of the Exchange, But Covered California States The Video Has Been A Good Marketing Tool For Them…Algo Duping Again!

You have to laugh your fanny off here when you hear Covered California state that it’s been a big media success…yeah what kind of success is the question.  The purpose was to attract and motivate consumers to sign up for health insurance.   I posted the video here.

Covered California Turns to Richard Simmons To Promote Get Covered “The Dance Off”…Very Interesting Video, WTF Is This (Grin)…

Why did I post it, to mock it of course as you have some idiotic 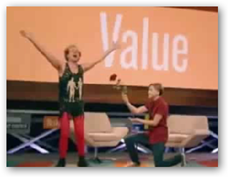 marketing folks out there that can’t tell the difference between the virtual online world with the real world. It’s a big problem everywhere and you can read all about it here as I identified this syndrome that’s occurring.  Go see the movie “HER” or even just watch the trailer, that’s enough to give you the message.  I touched on many examples at the link below so if you want to understand how folks get this weird thinking and perceptions permeated in their minds today, give it a read.

Of course it was a media success as it went wild with all looking at stating “how stupid” and the fact that you need intelligence to market today, just go for the soap operas and OMG effects, like you see in a lot of news articles today as reporters are starting to enjoy the same pay for performance crap that’s been hauntings doctors for a few years without any real significant value.

Darn where is that behavioral analytics portal when you need it that can help fix some of these behaviors (grin).  It sound to me that we better sign some folks up at the marketing department there…you know these algorithms are just an amazing fix that will help direct and cure all folks like this with issues (grin).  Let’s get one for Congress too so as consumers we can start our own risk assessments as from what I am seeing this is a real call for us to bring this forward…again look at the “HER” link above for further explanations of this stuck in the virtual world phenomena.

There’s some folks working in government that need behavior modification worse than we do…hey insurance companies, are you listening as you like those analytics and put a lot of money into them and own some as subsidiaries….I think I may have identified some folks that are ready for some pilot programs in this area.

Overall I have been supportive here and will continue to be to encourage folks to sign up but I am not that far out that I can’t recognize bull shit when I see it too and some real issues in talking head with marketing.  See what happens with quantitated justifications…marketing folks just bit and bit and bit on this one big time..they’ve been duped almost beyond recover (grin).  Watch Video #1 in the footer here and you’ll get the message as to think about being a skeptic when things are beyond belief…happening more and more out there.  Lately I feel like my blog has become more “shrink” oriented and I’m not one by all means, just logical and common sense prevails here.

We already know that some of the stuff out there tries a double sell and is kind of masked a bit if you will as the portals scrape data for sale too…We saw that with the Penn State Gestapo type of enforcement with wanting to fine non participants as it was cutting short the amount of data they could sell.

Bring the sane folks in for that audit..who knows there could more of these in the works too!  Covered California is obviously confusing hits on the video with effective marketing…what a scream….The full video by the way had a few minutes of talk before all the weird action began…which if they would have left it at that we would not be having this little chat.  BD

Visit the Algo Duping page to learn more of we get sucked with marketing computer code created by geniuses who know it works.

A California senator is seeking to audit the state’s Obamacare exchange after a Watchdog.org story revealed that $1.37 million was spent on a campaign featuring an eight-hour web stream starring a gyrating Richard Simmons.

The Jan. 16 event — now immortalized on YouTube — showed celebrity fitness trainer Simmons writhing on the ground to an MC’s chant of “Get Covered, hashtag, uh-huh,” a reference to Covered California, the state exchange. At one point, he snuggles up to a contortionist following a dance-off.

“What a waste of money — oh, my gosh,” state Sen. Ted Gaines said in an interview. “I looked at the video and was blown away that they would spend money on that. And for them to think that people would want to sign up for health insurance from seeing it? Give me a break.”