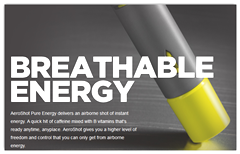 cup of coffee which seems harmless enough.  Ok so you take 3 or 4 snorts, some like me drink that many cups daily anyway.  If you really like caffeine, you can bathe in it, suck it down in lollypops and more.  There are geek sites all over the web that sell caffeine in different types of products.   The product doesn’t need FDA approval the article indicates as it has some vitamin supplements included as well.

Who can figure out what gets priorities today in Congress?  From reading the web page it sounds like it goes to your stomach actually.  This was invented by a professor at Harvard.  The website also says no caffeine goes to your lungs.  This will be interesting when it comes out in January in Boston and New York and the Senator can certainly find more important issues to address by all means.  BD

According to the senator’s office, the product is not reviewed by the FDA — it apparently skirts regulation by claiming it contains a vitamin supplement.

According to its website, Aeroshot lets the user inhale caffeine in powdered form. It dispenses 100 milligrams of caffeine in a just few puffs. The jolt is equivalent to a large cup of Starbucks coffee.

The product is apparently being marketed to consumers ages 12 and up with the emphasis on helping students stay awake and study.