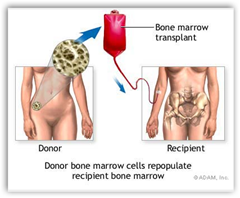 the times as far as what the procedure really is.  Bone marrow donors are hard to find and one organization wants to offer $3k in scholarships, gifts to charities and so on.

I t now appears any form of compensation goes and patients can now ask insurers to pay donors, how that will work will prove interesting and they should give that a whirl if they are the risk management tightwads they live up to be.  BD

(Reuters) - Some bone marrow donors can now receive compensation for their donations without committing a felony, a federal appeals court ruled on Thursday.

The court said that new technologies for transplanting bone marrow make the tissue more like blood and less like an organ. The National Organ Transplant Act prohibits compensation for human organs, such as kidneys, but allows payment for renewable tissues such as blood.

A California nonprofit MoreMarrowDonors.org, parents of sick children, and a physician sued U.S. Attorney General Eric Holder in 2009, challenging the ban on compensation for bone marrow donations. They argued that allowing financial incentives for bone marrow donation was crucial because of the extreme difficulty of finding a genetic match.

A California district court sided with the government, but the 9th Circuit Court of Appeals disagreed. The court found that new methods of harvesting stem cells from the donor's blood stream rather than the bone did not amount to an organ transfer.