hematoma.  Having the device handy can also help determine if there is a need for an immediate CT scan but it is not a substitute for the procedure and only an aid to help determine the need for the scan and again the potential brain and skull damage.  This is pretty neat how it works if you read below on how it is using infra red that can penetrate  tissue and bone in the skull area and the results are shown on a hand held computer.  BD

The U.S. Food and Drug Administration today allowed marketing of the 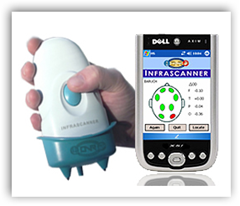 Intracranial hematomas occur when blood from a ruptured blood vessel collects within the brain or between the skull and the brain. As blood expands within the brain or in the narrow space between the brain and the skull, the brain becomes compressed. This can produce symptoms such as headaches, vomiting, dizziness, lethargy, weakness in the arm or leg on one side of the body, seizures, or unconsciousness. An intracranial hematoma can be life-threatening if it is not treated immediately.

According to the Centers for Disease Control and Prevention, each year about 1.7 million people in the United States experience a traumatic brain injury.

The Infrascanner, Model 1000, uses a scanner that directs near-infrared light, a wavelength of light that can penetrate tissue and bone, into the skull. Blood from intracranial hematomas absorbs the light differently than other areas of the brain. The scanner detects differences in light absorption (optical density) and transmits the information wirelessly to a display on a hand-held computer.

By comparing the optical density from a series of scans of specific areas on both sides of the skull, a trained health care provider can use the information provided by the device, in conjunction with other clinical information, to determine the likelihood of an intracranial hematoma and the need for further diagnostic procedures, such as a computed tomography (CT) scan.