The implants are filled with an unapproved non-medical grade material said to be made for mattresses?  The article goes on to say around 40,000 women in the UK 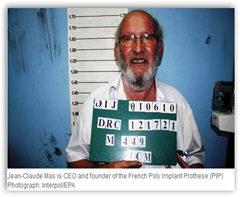 have the implants.  You wonder how does this go without notice for so long.  France stated that all women should have them removed and the UK was not as aggressive; however plastic surgeons in the UK felt a little different and said the suggestion from France was not at all out of line.

The company has been liquidated and the use of the PIP implants has been banned but when women have them removed I would definitely have the silicon tested to see exactly what is in there for sure.  In the meantime the former CEO appears to be in hiding.  We didn’t have the implants in the US but South America was also affected with having used the product.  BD

Interpol is seeking the arrest of Jean-Claude Mas, the founder of a French company whose breast implants are at the centre of a global health scare.

The international police agency has issued a red notice for Mas. His firm Poly Implant Protheses (PIP), which went into administration last year, supplied implants to tens of thousands of women in Europe and South America.

Interpol's website says the 72-year-old is wanted by Costa Rican authorities for crimes involving "life and health" but gives no further details. France has offered to pay for an estimated 30,000 women in the country to have their PIP implants removed because of risks the products could rupture and leak industrial-grade silicone.