This is not exactly like Remote Area Medical in the fact these are not private doctors by all means, but rather military doctors and dentists who are providing care at no cost, that part is the same as Remote Area Medical, free for those 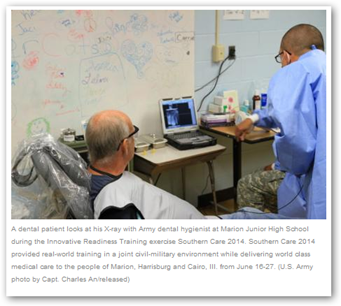 who show up and need care.  When you read through the article one thing that stands out and RAM says the same thing, “it’s the people” and being able to help those who need it.  The clinic was located at a high school and people were lined up.  It’s part of what the Department of Defense calls the Innovation Readiness Training and participants benefit with free medical care they can’t otherwise afford.

Not only military people were seen but anyone who showed up.  3000 patients were seen during a two week period and the military providers said they hope to get to come back again next year.  When you look at how Remote Area Medical grew, well are we going to see the same thing here?  It could be quite possible as the US healthcare system is locked up with a lot of greed and complexities that are just not working for folks.  It’s easy to go get medical care when you don’t have all the complexities attached.

Healthcare IT complexities if you have not taken note are following the same methodologies as what you see on markets, just keep making it more complex and difficult, and work those algorithms for profit.  Sad but it’s the same thing.   Here’s a good example of what’s going on here in southern California with “scoring” of doctors and this has nothing to do with care but rather about controlling and lessening what doctors get paid.  If you want to use some “market” technology words, this link below kind of says we are “front running doctors” if you will.

Unless a doctor has done something horrifically wrong we don’t care about ratings anymore and don’t think it has even sunk through the heads of those at the CMS yet either, it’s about who’s available to see us so you can see the algorithmic manipulation that is going on here with United as just one example.  When you need care and it’s free, nobody’s asking question that point and people get taken care of.  You can see how the over use and abuse of “scoring” for money has just taken over in the US healthcare system  and it all ends up with using numbers to cut pay or deny something.  It’s all about money.  In the meantime CMS is sitting around wanting to create a 5 Star Rating process on doctors which shows how out of touch they are and how vulnerable some of the official that work there are to being duped at times we don’t care we want a doctor to see us and we’re tired of the clicking around on websites.  Besides when you really are sick, that’s the last thing you want to do is spend hours of time looking up what ends up being a lot flawed doctor data out there too.

When you read the reports that come out US quality of healthcare keeps declining and and selling of data everywhere has taken over as now it’s more about the addiction to the data and analytics rather than care and I don’t even thing the government is cognizant of this and I even caught the White House Communication bot using junk science on one of their emails, so they are very much stuck in “The Grays” not being able to tell the difference between virtual and real world values.  I would expect a bit better from the government but it doesn’t seem to be getting there so thank goodness some parts of the government, like the DOD are making strides like this to help out and help “the real world” which is what counts.  Event the VA fell victim to “The Grays” as well which has been all over the news.

I don’t fault the government for trying to find a solution for healthcare by any means, but I am scared to death that they are going down the wrong road here again with the over focus on analytics, done way beyond what is needed to give good care and numbers seem to be directed that way as “numbers don’t lie but people do”.  BD

MARION, Ill. – The citizens of southern Illinois were still showing up bright and early Friday morning at the Marion Junior High School. June 27th was the final day and people were outside hoping to be seen during a military exercise that was part of the Department of Defense’s Innovative Readiness Training.

The IRT, as it is known by the military, is a way for military service members to train while serving the underserved communities across the United States, and Southern Care was the name of this particular IRT exercise.

Southern Care brought military medical, dental and optometry providers and professionals to the towns of Marion, Harrisburg and Cairo during the exercise from June 16-27 at no cost to anyone that came.

Community leaders of the three towns, as well as Mounds, Ill., and members of the Delta Regional Authority submitted an application to the Office of the Assistant Secretary of Defense, which over watches the IRT missions.

Specialist Jeremy Bostwick, a light-wheeled vehicle mechanic from the 810th Medical Company as well, echoed similar sentiments. “The fact that we are able to help out this community has been a major impact on me and the others that I am working this IRT,” he expressed.

Paschal’s dental story was one of many. Over 1,600 patients were seen for dentistry with 750 patients receiving cleaning and more than 1,800 extractions performed.

Saturday, July 05, 2014
Medically Related , My Commentaries , Other Items of Interest